I’ve added a link alongside to Tim Gower’s blog (thanks to Carrie Jenkins for recommending it), and I’ve removed links to a couple of seemingly dormant blogs.

I’m a bit staggered to find that the number visitors to this blog have doubled over recent weeks, to over a thousand this week. A sudden enthusiasm out there for musings about absolute generality or recommendations for logicky reading? Somehow I doubt it! 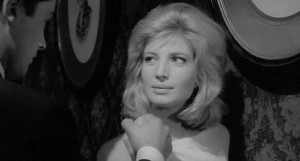 Perhaps unsurprisingly, the tracker shows that this geeky post still gets a number of hits a day, even though it just links to someone else’s neat solution to a Leopard irritation. Rather more surprisingly, there is a steady if small stream of people who’ve ended up here because they are searching for photos of Monica Vitti (so as not to disappoint, here is another screen-capture from L’Eclisse). But I wonder why they are searching … Other one-time film buffs, perhaps moved by Antonioni’s death earlier in the year to revisit the haunting films first seen so long ago? Or is it that the films, and Vitti’s iconic presence, are being rediscovered? I find it so very difficult to imagine how they would now seem, if being seen for the first time, against such an utterly different cinematic background to that of the early 60s.

2 thoughts on “Blog roll … and thanks to Monica Vitti”