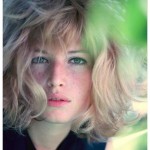 It’s all been getting a bit monochrome and serious here lately (memo to self: lighten up a bit). So as a distraction from the rigours of logic here’s another in that occasional series of photos of Monica Vitti. This one — click to enlarge — was taken in Rome by the photographer Willy Rizzo in 1960, the year of L’avventura, when she was 28.

A lot has been written about that elusive film: this, by the critic Gregory Solman, perhaps gets something right about it.

I don’t get to the cinema much these days: but I wonder what comparable films are being made that can and will be watched, repaying the same serious attention, almost fifty years on. Any suggestions?

4 thoughts on “Back to Monica Vitti”