Back, after a longer-than-intended break, to Curtis Franks’s The Autonomy of Mathematical Knowledge. (You can read previous instalments of my comments here. And to keep things ticking over more regularly, I’ll blog about smaller chunks. Can you stand the suspense?)

I did complain a bit at the outset about Franks’s prose. You can certainly tell he hasn’t been through the rigours of tripos, suffering a one-to-one supervision for an hour every week with someone repeatedly asking “And what exactly do you mean by that?”, which after sixty or seventy sessions does tend to have an effect. Here, there’s just too much arm-waving loose talk for me.  And some of it isn’t even in English. For example, what are we to make of a sentence starting “If the purpose of foundations is not to vouchsafe questionable mathematics by reducing it to some privileged theory …”? I can only assume that Franks thinks that “vouchsafe” means something like “vouch for the safety of”: which it doesn’t. (As I know from my own experiences, CUP copy-editing standards these days certainly can leave something to be desired.) Sorry to bang on about this: but it is bad news when the prose gets in the way of transparently clear philosophy. Enough said.

§3.3 discusses the Foundations of Geometry. Hilbert’s originality is to show how we can use model-theoretic means to prove consistency and independence results. In particular, he shows that a certain axiomatized theory of three-dimensional geometry is consistent by constructing an intepretation in the domain Ω (the domain containing all those numbers you can get by starting from 1, and applying addition, subtraction, multiplication, division and the operation √(1 + x²) a finite number of times). Treat points as ordered pairs, lines as certain ratios, and so on. The geometric axioms then all come out true on this interpretation when spelt out. Hence, says Hilbert, “From these considerations, it follows that every contradiction resulting from our system of axioms must also appear in the arithmetic related to the domain Ω.”

The way Franks reports this is pretty odd though. For a start, in fn. 1 on p. 69, he says “Hilbert’s model Ω had a finite domain.” Not so: it’s countably infinite. Again, “Hilbert constructed models out of the positive integers” (pp. 68–69). Not so: they are constructed from a subset of the algebraic reals. And “… under this interpretation, the axioms of Euclidean geometry, the axioms of Euclidean geometry expressed arithmetical truths”. Again, not so: or at least not in the sense of “arithmetical truths” in modern philosophical writing, which means truths about the natural numbers (a reading naturally triggered by talking a couple of lines earlier about positive integers, and also suggested by drawing a contrast between this “arithmetical” consistency proof and a “proof relative to the theory of real numbers”). If he is using “arithmetic” in the broader sense that Hilbert used when he talked, old-style, of the arithmetic of Ω, Franks should have explicitly said so.

So presentationally, this all leaves something to be desired. But what is the point that Franks wants to make in this section? A key theme is this:

Hilbert’s choice of an arithmetical interpretation of the Euclidean axioms … has nothing to do with the epistemological status of arithmetic. … The value of his consistency proof, rather, was simply that it showed for the first time that the consistency of geometry could be proved mathematically and was therefore not dependent on grounding in Kantian intuition and the like. (p. 70, p. 72, my emphases)

I worry, though, about the “nothing” here. And I worry too about the “therefore”.

Take those worries in turn. First, if Hilbert had thought that the consistency of the arithmetic of Ω was problematic, then would his consistency proof have done what it is supposed to do, i.e. to demonstrate that “it is not possible to deduce from [his] axioms, by any logical process of reasoning, a proposition which is contradictory to any of them” (Hilbert, Foundations, p. 27.)? He clearly announces a consistency proof: and giving a relative consistency proof for geometry only counts as delivering the desired goods if the background “arithmetic” can indeed be taken to be consistent. So his choice of background theory has everything to do with its assumed security!

Second, suppose that we in fact hold that a proper confidence in “arithmetic” is in fact grounded in Kantian intuition, then the fact that we’d mathematically proved geometry consistent relative to arithmetic would not deliver us a proof that geometry is consistent (which is, to repeat, what Hilbert wants) without in addition invoking something grounded in Kantian intuition. So Franks’s “therefore” is also misjudged.

Here’s the latest episode — in which we at last get to the First Incompleteness Theorem. (You can download the latest versions of earlier episodes here, as well as a composite PDF of all the episodes to date.)

That’s a good place to pause and get back to other stuff. The plan is for five more episodes: two more around and about the First Theorem, two on the Second Theorem, and one lightning tour of the bits from the last part of my book which are most relevant to Gödel’s Theorems. But these episodes won’t be written until lectures start again in the New Year.

The latest episode of Gödel Without Tears — on the Arithmetization of Syntax — is now available here.

No, this isn’t about the latest television dramatisation of Emma (though actually, I thought it was really rather good, and Romola Garai as Emma was terrific). Rather, this is about reading Austen again, this time on an iPod Touch, using the Eucalyptus app.

Of course, I read more and more logic and philosophy onscreen: my MacBook Air has an amazing screen, and that’s a pretty comfortable experience. But I’ve not been minded to read novels onscreen before, let alone on the tiny iPod screen: I too much like the look and feel of real hardback books. Still, I saw a recommendation for Eucalyptus which you can use to freely download classic lit. from Project Gutenberg, and which then formats the text files rather elegantly. There’s nice eye candy too — a rather cool “page turn” as you flick your thumb across the screen — but it is the beautiful font and screen layout that make this miles better for reading than anything else I’ve tried on the iPod Touch. And, to my surprise I found myself reading the whole of Emma on the small screen — in bed (where you wouldn’t take the MBA), at breakfast, in cafés, on trains, wherever, over the last week. I had the novel with me all the time, and it is surprising the number of opportunities for reading there are in a day.

Anyway, if you have the iPod Touch or iPhone and have resisted the idea of using it to read classical novels onscreen — obviously it is only out-of-copyright books that are freely available like this — try Eucalytpus. You might be very pleasantly surprised too. 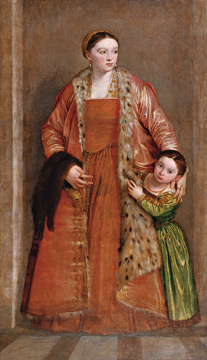 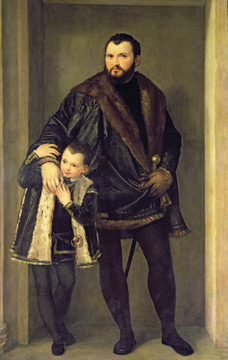 Back from a few days in Paris. Fortunately the blasted museum strike didn’t hit the Louvre until after we’d seen the wonderful Titian, Tintoretto, Veronese exhibition which was in fact one of our reasons for going now (though it did stop us going back for a second visit). It really is beautifully put together: hugely recommended.

One particular delight was seeing together Veronese’s pair of portraits of Iseppo and Livia da Porto and their children. (Normally he and their son are in Florence, she and their daughter peeking round her mother’s skirts are in Baltimore.) Worth the trip by itself.

I hadn’t noticed that Craig Smorynski has reviewed my Introduction to Gödel’s Theorems in Philosophia Mathematica — thanks to Eckart Menzler for alerting me.

The goal of the book is not to introduce the reader to Gödel’s Theorems, which can be done in far fewer pages than the roughly 350 pages of the book, but to introduce the whole problem area initiated by the appearance of Gödel’s paper. The author succeeds in this broader goal as well as can be expected.

Smith does as thorough a job in presenting and proving Gödel’s Theorems as one could hope for in a book of this type. I do not hesitate to recommend the book as an introduction to the whole circle of Gödel’s Theorems and the issues surrounding them to the major portion of Smith’s audience: the ‘philosophy students taking an advanced course’. For them, Smith’s book is about as good as it gets.

Given how much I admire Smorynski’s own classic presentation in his Barwise Handbook article (and of course other work of his), this is praise indeed, and I’m delighted! Let me just add a few comments on some of his comments.

The daughter’s quite excellent cooking blog has kicked into life again … Always worth a read. Not that I’m biased or anything.

On the Philosophy Faculty website, we have some “suggestions for those intending to read philosophy and/or beginning a philosophy course“. But this is an elderly document which I first put together about ten years ago, and which hasn’t been revised since 2002. Well, I’ve been asked to update it. But since I no longer do any undergraduate teaching except formal/mathematical logic stuff of one kind or another, I really haven’t been keeping an eye on recent good introductory philosophy books — whether general books, or on particular areas of philosophy — of the right kind of level. So I’d really welcome any suggestions, pointers to other departments’ comparable lists, etc. etc. All comments very gratefully received.

I’ve updated all the episodes so far to give them what I hope are more useful headers (a bullet-pointed list of topics). The last two episodes have also been more significantly revised. You can get the latest, greatest, versions here.

The latest episode showing how a theory like Q can express/capture primitive recursive functions and relations is now online. [As always, I’ll be very glad to hear about typos/thinkos.]

Earlier instalments can be found here.