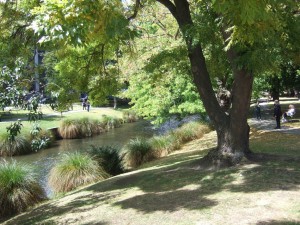 There couldn’t be much greater a contrast between LA and Christchurch — and, for us, the differences all favour Christchurch, hands down. It is human-scaled, wonderfully green, relaxed, and somehow comfortingly familiar in its almost-Englishness.

Though there are more than enough small differences to savour. For example, the early settlers obviously didn’t mess about when clearing the native bush. So the great park near the centre of Christchurch could have been transported from an English city, with avenues of planes, and great oaks and limes (and there are mallard ducks on the ponds, and house sparrows hopping around as you sit outside a cafe). But, for all that, as you walk through the shade on a sunny summer’s day, the racket of the cicadas sounds entirely unEnglish.

It is nice, too, to be understood first time in shops and cafes (LA was occasionally  hard work — The Daughter reports the same from Miami, where she has to get her Italian partner to arrange complicated things as the locals find his English a lot easier to understand). And what they say about Kiwi friendliness is all true.

I think I’m really going to enjoy it here.