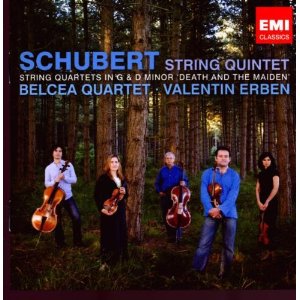 I have been meaning for some time to write recommending the Belcea Quartet‘s Schubert recordings. There’s one double disk of the G major, Death and the Maiden, and the Quintet, and another disk of the Rosamunde Quartet, the E flat, and the Quartettsatz. Both seem to me (and not just to me!) to be quite stunning — surely comparable with the Lindsay’s great recordings (and indeed, I suppose not dissimilar in their whole approach).

But I got to see the quartet playing live for the first time tonight in the very intimate setting of the Peterhouse Theatre here in Cambridge (part of a series of concerts which includes the  remarkable prospect of Viktoria Mullova playing in this tiny space which seats less than 200 people). In their new line up — with a new second-violin — they played the first of the late Haydn Op. 77 quartets, the Grosse Fuge(!), and then after the interval  the first Rasumovsky. All jaw-droppingly good (though I confess I do prefer hearing the Grosse Fuge played as the culmination of Op. 130; coming at it without the preparation of the journey there, it can seem too extreme, too outlandish).

The Belcea’s Rasumovsky in particular was as good as I have ever heard, live or on disc — everything that that recent feeble performance by the Endellion wasn’t. Passionate, by turns driven and etherial, utterly engaged (and stunningly together given the very recent change in line-up, with an intense rapport).