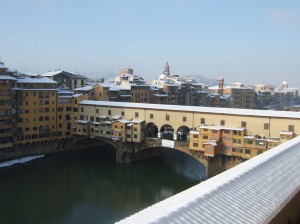 Well, that isn’t supposed to happen. Heavy snow in Florence before Christmas. The city cut off. The airports closed.

But there are far worse places to be forced to stay a couple more days than planned. The galleries and the churches were still open more or less when they were supposed to be; the restaurants still a delight; and our welcoming and very comfortable hotel had no problem letting us stay on a couple of days (and we indeed had the very room that was used in the film A Room With a View: here’s the Ponte Vecchio from our terrace, the day after the snow.)

There were of course other tourists still around; but we were a sprinkling among real Florence out and about doing its Christmas shopping. Even the Uffizi was quiet. Still, after six nights, you begin to suffer from visual overload, and even I find that the thought of yet another meal out begins to pall. So it was good to get back last night to an equally snowy Cambridge.