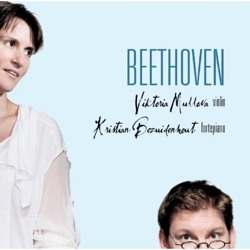 Who? Not a household name, to be sure. And a new name to me ten days ago. But we went to a concert in the startlingly starry Peterhouse Camerata Musica series to hear Viktoria Mullova playing three of the Beethoven sonatas. She was good (but not, to be picky, as magical as she can be). However, Kristian Bezuidenhout, her accompanist on a fortepiano, was the revelation of the evening. His instrument had a wonderful tone (the most attractive fortepiano I think I’ve heard) and his playing was spectacularly good, dazzling passage work when called for, but always very musical, and sensitively responsive to Mullova’s playing. The combination of her playing on gut strings and his 1822 instrument worked perfectly. I can very warmly recommend their disk of the Kreutzer sonata and the earlier 3rd sonata (one of the other two pieces they played in Cambridge): I’ve now listened to it a few times with great enjoyment.

3 thoughts on “In praise of … Kristian Bezuidenhout”