A very moving concert last night. In the small Peterhouse Theatre (a lovely space for intimate music), Menahem Pressler played Beethoven’s A-flat major sonata, Op. 110, Debussy’s Estampes, and then Schubert’s last piano sonata D. 960. He talked touchingly at the beginning of the evening, and this was evidently music that meant a great deal to him. Pressler’s playing now is not the most technically secure, but his desire to communicate with his audience is undimmed. 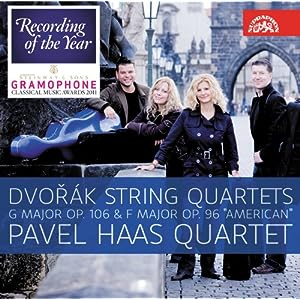 The Schubert in particular was very affecting: in the second movement, the poignancy of an old man now 87 playing the searing music of a young man facing early death was almost too much to take. We will remember the occasion a long time.

It can be irritating though — can’t it? — to hear tell of great concerts that you’ve now missed (and couldn’t have got to anyhow). So let me mention something else which is quite wonderful in a different way, the Pavel Haas Quartet’s Dvořák disk. Hardly a discovery by me! — it’s the recently announced new Gramophone Recording of the Year. But it really is astonishing. I’ve always thought the old performance of the “American” quartet by the Hollywood Quartet was in a league of its own (one generation from the shtetl, is it fanciful to hear the tug of a vanished Europe in their playing?). But this new recording from the young Czech quartet is at least as great. I’m bowled over.