The Belcea Quartet were playing in Cambridge again a couple of days ago, in the wonderfully intimate setting of the Peterhouse Theatre. They are devoting themselves completely to Beethoven for a couple of years, playing all-Beethoven concerts, presumably working up to recording a complete cycle. Their programme began with an ‘early’ and a ‘middle’ Quartet (Op. 18, no. 6,  and Op. 95). The utter (almost magical) togetherness, the control, the range from haunting spectral strangeness to take-no-prisoners wildness, the consistent emotional intensity, was just out of this world.

The violist Krzysztof Chorzelski gave a short introduction before the concert and he said how draining they find it to play the  Op. 95; and I’m not sure that the  Op. 127 after the interval caught fire in quite the same way (though in any other circumstance you’d say it was the terrific performance you’d expect from the Belcea). But the first half of the evening was perhaps the most stunning live performance of any chamber music that I’ve ever heard. I’ve been to a lot of concerts by the truly great Lindsays in their heyday, but this more than bore comparison. Extraordinary indeed. The recordings when they come should be something else. 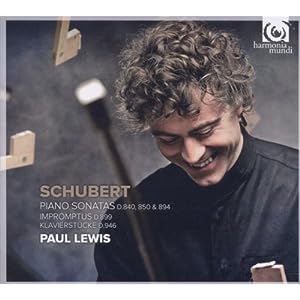 Meanwhile, let’s contain our patience! Here’s some other recordings to recommend, that can be mentioned in the same breath — the new two CD set of Schubert from Paul Lewis, the D. 850 Sonata, the great D. 894 G major, the unfinished ‘Reliquie’ D. 840, the D.899 Impromptus — and last but very certainly not least the D. 946 Klavierstücke (try the second of those last pieces for something magical again).  By my lights, simply wonderful. I’ve a lot of recordings of this repertoire, but these performances are revelatory. Which is a rather feebly inarticulate response, I do realize — sorry! But if you love Schubert’s piano music then I promise that this is just unmissable.

1 thought on “Something extraordinary”