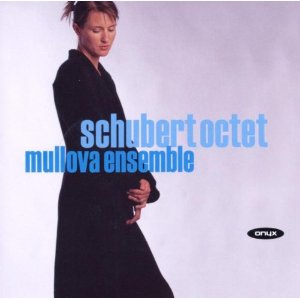 I was going to post a rave recommendation for this recording a few weeks ago: but it was about the time of BBC Radio 3’s ten day, wall-to-wall, 24hr, Schubert season, so I thought I should leave it a while, till you could bear to hear yet more of Franz.

I’ve become a great fan of Viktoria Mullova’s recent CDs (her Bach, the Beethoven sonatas with the fortepianist Kristian Bezuidenhout, her revelatory Vivaldi). So, a bit speculatively, I sent off for her 2005 recording of the Schubert Octet, not quite knowing what to expect. Well, this is fantastic. Don’t be put off by the quite misleading insert photo: this isn’t an unbalanced star vehicle, Mullova plus anonymous band. All the players are just terrific and the ensemble playing is all you could ask for. But it’s more than that. In the past, I can’t say I’ve ever really been bowled over by the Octet — if you’d asked me, I’d have said “happy enough tootling, but …”. However, this performance strikes me as being in a different league to those I’ve heard before, and brings the music much closer to the world of the A minor and D minor quartets of the same year. For example, there’s a seriousness in the Adagio that other recordings I know don’t really bring out.

But don’t take my word for it. I’ve just thought to look up the Penguin Guide’s recommendations for the Octet, and they write “This newest version of the Octet … is not only the best since the celebrated 1957 Vienna Octet version … but it actually surpasses it. These artists find a greater depth than their predecessors in a work we all think we know well. There is … grace, pathos and tenderness here …” Exactly.