It is very cheering how many generous, eagle-eyed, and logically clued-up people there are out there, who have volunteered to help out with the proof reading of parts of Gödel Mark II, with only the smallest of bribes as an incentive. Maybe it isn’t quite so cheering to note how few come from the UK. And it is even less cheering to have one’s bad mistakes pointed out. Typos I can live with: but thinkos where a proof gets fouled up, for example, aren’t so great to find. Still, it is a considerable relief to have such glitches caught at this stage in the process. 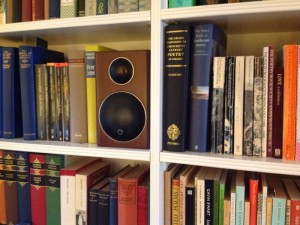 I have been listening to a lot of baroque/early classical music as I hack through lists of corrections and suggestions for stylistic improvement. By the way, I don’t think I’ve mentioned here my purchase a few months ago of some entry-level hifi — not the really high-end stuff that serious buffs go for, but still a heck of a lot better than what it replaced. There are size constraints dictating the sort of speakers I could go for: so I have a pair of Monitor Audio Radius R90HD mini speakers sitting in the bookshelves, with a matching R360HD subwoofer sitting on the floor. (That’s an odd phenomenon, isn’t it? For classical music, the subwoofer mostly emits quiet growls and rumbles — yet it opens up the sound enormously.) And then I bought an Arcam solo mini amplifier/CD player/radio (again, physical size was an issue, though in this case not a deal-breaker). As it happens, all made within a few miles of Cambridge. I am totally delighted, and have nothing but praise for the local branch of Sevenoaks Sound and Vision who gently advised and let me listen to a number of systems at considerable length.

Anyway, here are a few recommendations for music to do proof-corrections to!

OK, time to select another disc and get back to proof-reading!

1 thought on “The proof-reader’s playlist”