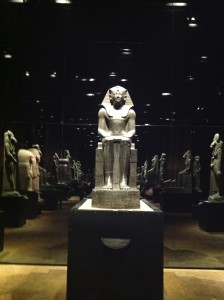 It’s been a while since we were in Italy, so a quick city break — this time to Turin (a new city for us). The central city is rather impressive, wide colonnaded streets and some large piazzas. And with the streets being laid on pretty much on a grid system, you get some very long urban views, with occasional glimpses of the mountains beyond. We (unsurprisingly) had some pretty good meals, and paused not a few times in cafés — for the best ever macchiato, go to the delightful Caffe Mulassano. But the high point of our visit was (surprisingly) the Museo Egizio. Yes, of course this is famous, usually said to be the best Egyptian museum outside Cairo: but to be honest we went a bit dutifully, only to be bowled over. The collection really is quite overwhelming. The museum is undergoing refurbishment, and a  lot of the exhibits are still shown in a very old fashioned way, but even so, the cumulative effect especially of all the small ancient grave goods is astonishing. And the theatrically lit new display of the monumental statues is exceedingly dramatic. Surely unmissable if you happen to find yourself in Turin.

4 thoughts on “Postcard from Turin”