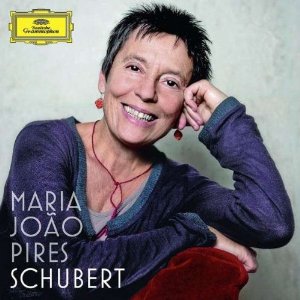 Suppose, just suppose, that one of the very greatest and most loved actors of his (or her) generation was tackling one of the high peaks of the repertoire, returning perhaps to a previous near-triumph with a quarter of a century’s more experience. Every broadsheet would have extensive reviews, though telling most readers about a performance they will never see (even if in reach of London and in funds to make the journey), because the tickets have long since sold out. There will be interviews with the actor, even colour-supplement spreads. You know how it goes.

Now here is one of the very greatest  and most admired pianists of her generation, still at the very height of her powers, returning to Schubert’s last piano sonata, a quarter of a century after a very fine earlier recording. You would have thought that the broadsheets with arts pages would at least notice this major event. After all, nearly all their readers can afford the CD, which is so accessible that it will arrive at the click of a button. So here surely is something worth reviewing. Here too perhaps is even an occasion for a retrospective pieces on a remarkable artist.

But no. As far as I’ve seen, nothing.

Which is not at all unusual these days. It is difficult  not to feel (as you do when look round your fellow concert-goers, noting all the grey heads) that slowly but inexorably a deep engagement with classical music is becoming less and less central to our cultural life.

Well here, let it be said, is the most extraordinary music-making, indeed inviting the most personal engagement. Maria João Pires offers us a performance of the A Minor Sonata D845  played with intense intimacy. There is nothing declamatory here: she is sitting across the room, playing for us listening, close around her. There’s a care to every phrase which isn’t mannered, wonderful lightness of touch when called for, and moments when time is slowed to a pause (her magical way with the Trio of the third movement). For this sonata alone you will want the disc.

But then there is D960. What is to be said? For many, this is very high on the list of  the music that matters the most, that has to be returned to time and again. We have a most wonderful inheritance of recordings from Schnabel onwards of this “music which … is better than it can be performed”. Brendel, Richter and Imogen Cooper, all more than once, Lupu, Kovecevich and Uchida — all are stunning in their different ways, all their recordings are to be listened to repeatedly.  And Pires herself recorded the sonata 25 years ago.

It would be absurd (or at least absurd for me) to try to make comparisons. Let me just say that this new recording is surely a more than a worthy addition to that great inheritance. This is not one of those more brooding performances where we are made conscious from the beginning that this is the work of a dying man (performances which give the first movement such ominous weight as to unbalance the whole sonata). There is an intimate directness to her undeclamatory opening: again, we are sitting with Pires — she is not addressing us across a concert hall. And it is only slowly that the intensity is ratcheted up in the first movement (especially about 11 minutes in), and then we are gripped by a new tension as the opening theme and development return once more. The following Andante sostenuto is unsentimental, played with a rhythmic delicacy that becomes magical. The Scherzo is played vivace con delicatezza as Schubert asks: but Pires deconstructs the Trio with bass emphases which I can’t recall being made quite so aware of before,  harking back to previous movements. The final Allegro has moments of lightness again but also a certain weight and drive giving a more-than-satisfying balance to the whole sonata, the tumbling final chords finishing in a sudden silence.

This won’t replace your other recordings of D960, how could it? But you will want to listen and listen again, and you will hear more from Pires each time. Wonderful.

[Added: The Guardian has now reviewed the disc, a little lukewarmly I feel.]

[Added a week later: and now the Telegraph has a very warm and properly appreciative review.]