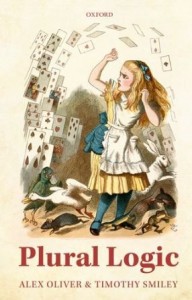 For quite a while, the favourite Cambridge example of a collective plural predication has been ‘Alex and Tim are writing a book’ (said with a teasing tone, as it was a long drawn out business). But our example will, at last, have to change. For the book is now published, as Plural Logic, out from OUP. Here’s their blurb as a taster (if you don’t already know some of their earlier papers on plurals):

Alex Oliver and Timothy Smiley provide a natural point of entry to what for most readers will be a new subject. Plural logic deals with plural terms (‘Whitehead and Russell’, ‘Henry VIII’s wives’, ‘the real numbers’, ‘the square roots of -1’, ‘they’), plural predicates (‘surrounded the fort’, ‘are prime’, ‘are consistent’, ‘imply’), and plural quantification (‘some things’, ‘any things’). Current logic is singularist: its terms stand for at most one thing. By contrast, the foundational thesis of this book is that a particular term may legitimately stand for several things at once; in other words, there is such a thing as genuinely plural denotation. The authors argue that plural phenomena need to be taken seriously and that the only viable response is to adopt a plural logic, a logic based on plural denotation. They expound a framework of ideas that includes the distinction between distributive and collective predicates, the theory of plural descriptions, multivalued functions, and lists. A formal system of plural logic is presented in three stages, before being applied to Cantorian set theory as an illustration.

I in fact saw a late draft of the book which Alex and Timothy kindly asked me to comment on, which I did with enthusiasm here and scepticism there, so I’ll be really interested to discover how this final published version works. It wouldn’t be appropriate for me to write a formal review  in one of the journals, even if asked, as I wouldn’t have the requisite distance. But that certainly won’t stop me giving some informal thoughts here over the next few weeks. Watch this space, then: and meanwhile, get yourselves a copy of the book!

3 thoughts on “Alex and Tim have published a book”