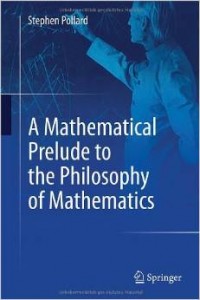 I certainly agree that if you want to study the philosophy of X, then it is good idea to know something about X! And that applies in particular when X = science or X = mathematics. It is hard work teaching philosophy of science to students whose ignorance of science is profound. Philosophers of maths can have things a bit easier. For in fact many serious philosophy departments do actually teach some relevant maths in-house, in the guise of mathematical logic courses. Students can encounter core first-order logic up to a smidgin of model theory, variations/extensions such as intuitionistic logic and second-order logic, something about theories of arithmetic, ideas about computable functions, and bit of set theory. True, these topics won’t necessarily be taught in the style of a hard-core maths course: the emphasis might be more on the Big Ideas and on conceptual foundations rather than on rather tricky problem-solving. But still, philosophy students who do tangle with the traditional menu of mathematical logic topics should acquire enough first-hand knowledge of enough serious mathematics for their philosophy of maths course to have something to work on.

Of course, if elementary mathematical logic is all the maths you ever get to know, you’ll end up with a rather skewed view of the mathematical enterprise. But at least you’ve made a start. It is then a nice question what other maths it would be good for a budding philosopher of maths to acquire some small acquaintance with. Now, Pollard’s title, and  then his talk in the Preface of the book’s “motley” character, might perhaps suggest for a moment that we are going to get an interestingly varied menu of topics, including some out of the usual run. But this isn’t really how things go. We in fact get three chapters on set theory, preceded by two chapters on arithmetic, and succeeded by another chapter on arithmetic and a chapter on intuitionistic logic. So in fact it is business pretty much as usual — mostly covering, though briefly, the sort of topics mathematical logicians typically cover for their philosophy students — albeit with some twists in the treatment of arithmetic which we’ll come to in a moment.

How then does this compare with other accounts of the familiar topics? Starting with the set theory chapters, Pollard fusses a lot at the outset, stressing that we shouldn’t be misled by unhappy metaphors of the “sets are like boxes …” variety, and recommending that we think of them as more like unordered list-types. And then he runs and runs with this idea, talking about “Zermelian lists” and more before reverting to standard set talk. But I didn’t find this particularly well done. And I frankly don’t think this, as an expository ploy, would be likely to work any better as an introduction to set theory than the standard approach of e.g. those wonderfully lucid entry-level books on set theory that I recommended in the TYL Guide.

The preceding chapter on first-order Peano Arithmetic is more conventional, but also rather compressed, and again there are significantly better options out there.

So that leaves three chapters to say just a little more about. The first chapter of the book is indeed unusual, for it starts by discussing Hilbert’s stroke arithmetic, so we get a discussion of tokens and types of tally marks, and operations on them, and then aims to develop primitive recursive arithmetic on this basis. The metaphysics of types here seems to get rather murky (types can be uninstantiated on p. 6, so they seem to be platonic universals at that point, but on p.7 it seems they are worldly enough for their existence to vary between worlds, so maybe not so platonic after all; and things aren’t really sorted out in Sec. 1.9 “Some Philosophy” ). Maybe we can work at extracting a clear position, but is this what we want to be doing at this early point in what is supposed to be a maths book? And indeed the ensuing development of PRA really could be clearer too. So I’m not sure I’d want to recommend this chapter either.

But Pollard in his Preface does invite readers to pick and choose. And I so choose the last two chapters! The first of these takes us back to arithmetic after the excursus on set theory, but now to Frege Arithmetic. Students encountering the (neo)logicist programme in their philosophy of maths course could well find this presentation quite useful, as a companion piece to set alongside the Stanford Encyclopedia article. (I should note that, as in other chapters in the book, there are lots of comprehension-testing exercises as you go along, which some will find helpful.)

Then the final chapter goes off somewhat at a tangent, presenting a certain approach to intuitionist logic. This approach has its roots in the work of Gentzen, Prawitz, Dummett and Tennant, aiming to show that there is a particular naturalness to intuitionist logic if we think of the meaning of logical operators as given by their introduction rules, with elimination rules required to be harmonious (with this idea developed against the background of a certain way of thinking about negation and absurdity). But the particular version of these ideas we get here is due to Jaroslav Peregrin, in his ‘What is the Logic of Inference?’ Studia Logica 88 (2008) 263-294. This review isn’t the place to argue whether or not Peregrin’s is the best version of that general line of argument for the special naturalness of intuitionist logic. But Pollard’s exposition is done with verve, and a student ought to find it intriguing and thought-provoking. So this is the best and most novel chapter in a rather patchy book, I think.