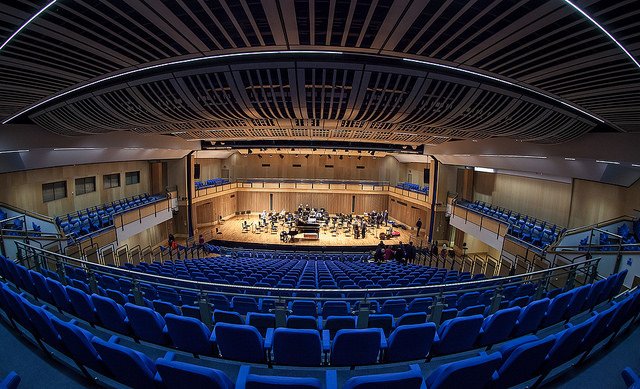 We’ve just made our first visit to a concert at Saffron Hall, less than forty minutes from Cambridge. This is a multi-purpose hall newly built as part of Saffron Walden County High School and opened at the very end of last year. Once upon a long time ago, Mrs Logic Matters was at school there, and as we ordered interval drinks at the bar, she found herself standing again outside the head’s office, remembering being torn off a strip inside (mascara, too much; skirt, too short …).

But I digress. The Hall itself is large and the stage huge, as you can see, so the four music stands for the string quartet (and raised seat for the cellist)  looked very lost and lonely on the bare expanse. I worried that this space wasn’t going to work for such a small ensemble. Quite wrongly. The hall dimmed to leave the performers in a central pool of light. The acoustics were simply wonderful (apparently, there are state-of-the-art adjustable  acoustics). The sight lines were perfect. The general ambience was very engaging, with particularly friendly front-of-house volunteers.   There’s even a lot of parking. We were very impressed indeed with the Hall.

And the Brodskys? They began with Stravinsky’s short Three Pieces for String Quartet, new to me, and then gave a magical account of the fifth Shostakovich Quartet before the interval. Haunting and sensitively done. Bowled over. After the interval, however, the quartet played Death and the Maiden, and — by contrast — neither of us particularly warmed to their performance. (I had my doubts about the suitability of first violin’s playing style, and there wasn’t enough youthful fierceness either in the opening movement or the closing dance of death.) Still, the Shostakovich alone was more than worth the journey.

The main reason for posting this, however, is very warmly to encourage anyone within striking distance of Saffron Walden to check out the Hall’s programme of concerts over the next few months: Maria Joao Pires, The Sixteen, Ian Bostridge, Paul Lewis …  in a number of cases repeating a programme from the Wigmore Hall a few days before or after. A rather astonishing line up. The efforts of the new Director in her first season are more than worth supporting.