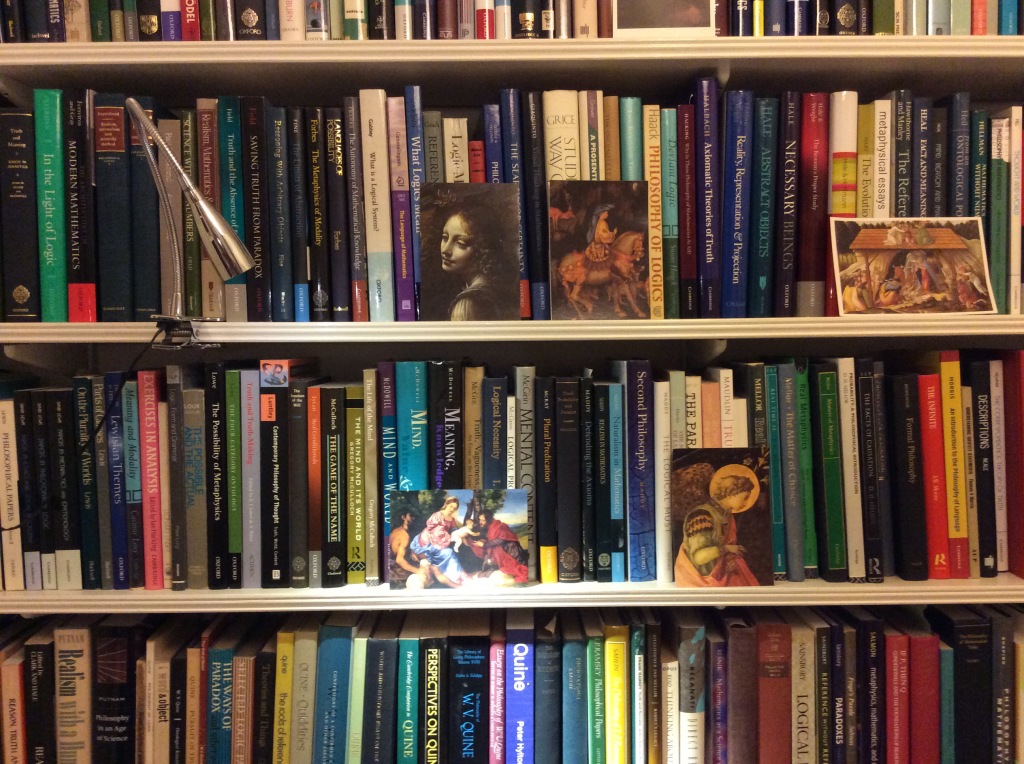 So, over the last months, quite a few more large boxes of books have gone to Oxfam. I have kept almost all my logic books. But in three years I must have given away some three quarters of my philosophy books. Very largely unmissed, if I am honest. Those works of the Great Dead Philosophers are no longer reproachfully waiting to be properly read. The more ephemeral books of the last forty years (witnessing passing fashions and fads) are largely disposed of. I’m never going to get excited again e.g. about general epistemology (too arid) or about foundations of physics (too hard), so all those texts can go too. I’m left with Frege, Russell, Wittgenstein, Quine; an amount of philosophical logic and philosophy of maths and related things; and an eclectic mix of unneeded books that somehow I just couldn’t quite bring myself to get rid of (yet). I’m not sure why among the philosophical remnants, Feyerabend for example stays and Fodor goes when I’ll never read either seriously again: but such are the vagaries of sentimental attachment.

But if I’m still rather attached to some authors and topics and themes and approaches, I’m not quite so sure about ‘philosophy’, the institution. Still, that’s another story. And anyway, those lucky enough to have philosophy jobs in these hard times certainly don’t need ancients grouching from the comfort of retirement: they have problems enough. True, judging from what’s been churning around on various Well Known Blogs over the last year, some might perhaps do well to recall Philip Roth’s wise words about  that “treacherous … pleasure: the ecstasy of sanctimony”. But being the season of goodwill, I’ll say no more!

Instead, for your end-of-year delight, here’s an updated version of the Notes on Category Theory (still very partial though now 74 pp.). Newly added: a section on comma categories to Ch.4, a short chapter between the old Chs 7 and 8, and a chapter on representable functors. So far, then, I cover