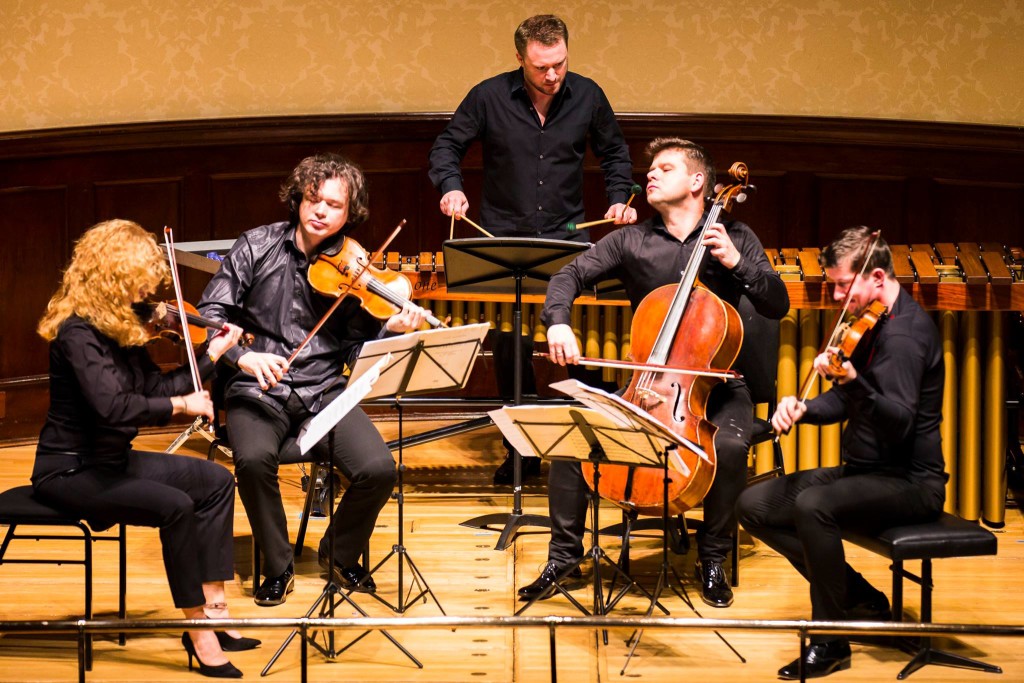 To the Wigmore Hall again last week to see hear the Pavel Haas Quartet playing Czech music old and new. The most engaging concert, we agreed, that we’d been to for months. Superlatives are in order!

To begin, Dvorak’s four Miniatures Op. 75a for two violins and viola (not so much a trio as pieces for violin accompanied by the other two strings). These were played wonderfully by Veronika Jaruskova with enough lyrical beauty in the final movement to make something really rather special out of these charming miniatures. Then into the first Janacek String Quartet, ‘Kreutzer Sonata’, with this often jaggedly urgent and restless music played with the PHQ’s characteristic controlled passion and commitment. The quartet’s ensemble, their unity in tone, is quite remarkable.

The PHQ were then joined by Colin Currie for the UK première of a piece commissioned for them, Jiri Gemrot’s Quintet for two violins, viola, cello and marimba. The sound world of the marimba sometimes interweaving with the first violin, sometimes set against strong chordal writing for the quartet, was captivating and often very exciting. The atomspheric slow movement in particular produced quite some magical sounds: “the first violin sings with an eerie, disembodied voice to a hypnotic accompaniment from the marimba”, as the FT reviewer puts it. We weren’t entirely convinced by the piece, although it somehow sounded so very Czech — occasionally the writing for the strings seemed too blocky, when more imaginative textures could perhaps have been developed. But the playing was just superb, and we’d certainly return to hear the Quintet performed again.

After the interval, the Pavel Haas played Pavel Haas, the second quartet ‘From the Monkey Mountains’, the one which features percussion in the last movement. This was, as we would hope and expect, a matchless performance of a very fine piece (a few years ago we might have said ‘neglected masterpiece’, so we owe PHQ much for championing Pavel Haas’s quartets). If you don’t know it, get their recording!

A five star concert, then. And the audience very rightly gave the PHQ the warmest, cheering, applause at the end. I hope they felt properly appreciated. For we only half filled the Hall, albeit in the middle of the week on a chill night. Which is a bit depressing when it is one of the world’s very greatest quartets, surely approaching the height of their considerable powers, and offering a programme which was engaging rather than challenging.

I just regret that we couldn’t go back to hear them again in another Bohemian programme on Saturday, though we’ve already pencilled in their next two concerts at the Wigmore: for the moment, we’ll just have to look forward to the PHQ’s Smetena CD (which is due out in late April).