I buy too many CDs and we go to a fair number of concerts, and so I usually blog only about some of the ‘five star’ discs or concerts which bowl me over. Which does mean that when I do offer reviews,  they tend to be consistently full of superlatives. It is certainly not that I’m an uncritical listener: very far from it. Still, I don’t want to be carping or tediously negative here (I’ll keep that for the philosophy!). I prefer to write about music, when I do, from heartfelt enthusiasm. And this time, the enthusiasm is for David Fray’s latest CD. 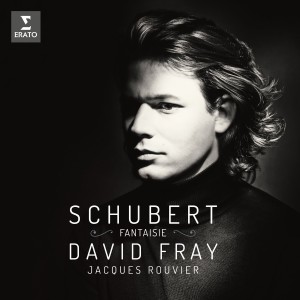 One of the very finest Schubert recordings of the last ten years, it is widely agreed, is Fray’s CD of the Op 92 Impromptus and the Moments Musicaux. He plays those pieces with luminous artistry and acute sensitivity — taking some notably slow tempi yet never seeming mannered or other than fully immersed in the complexities and ambiguities of Schubert’s music. There is, I have remarked elsewhere, something Richter-like in Fray’s intensity, and in his wonderful ability to impose his vision of the music.

Fray has now returned to Schubert, and indeed firstly to a piece indelibly associated with a quite extraordinary recording by Richter — the G major sonata D894. And the comparison in some ways is still very apt. For Fray too takes the first movement unusually slowly. Where, for example,  Brendel in his later digital recording takes 17′.16″ and Paul Lewis 17′.28″ — both very fine performances — Fray takes 19′.06″. This still falls far short of Richter’s astonishing, bordering-on-the-perverse, 26′.51″ in the (in)famous 1979 recording. Yet here is the magical thing: from Fray’s way with his very slight holdings-back, the slightest hesitations, to his control of the architecture of the movement, everything gives his performance a seeming scale closer to Richter’s. (He takes little more than half a minute more than Mitsuko Uchida’s 18′.29″ and yet Fray’s first movement  at crucial moments seems markedly more spacious.)

Another magical thing is the wonderfully nuanced clarity of Fray’s playing here —  effortlessly cantabile passage work, forte passages which never become brashly declamatory, unending attention to detail with nothing exaggerated or out of place.

Now, there can be a problem — can’t there? — with performances of some of Schubert’s major works: how to make a satisfying whole of a piece that starts with one or two immense movements — immense both in scale and emotional weight. (One of the many things that I particularly admire about the Pavel Haas Quartet’s Schubert CD which I reviewed here is the extraordinarily balance they achieve across the four movements of Death and the Maiden and again of the String Quintet.) How does the rest of David Fray’s performance of the ‘Fantasie’ sonata hold up against this test?

Extraordinarily well, I would say. Partly this is because, although the first movement is played very expansively, it is never becomes heavy. And partly because of the compelling readings he gives of the other movements. I was rather surprised, when I checked, that Fray’s timings in the last three movements are all rather quicker than Brendel, Lewis and Uchida. Yet he plays with such grace and attention to texture and detail that Schubert’s music is given all the space it needs, and there are again quite magical touches. The Trio in the third movement catches with your breath. The final Allegretto dances through its episodes with a wonderful lightness of touch in building to its conclusion.

In short, I would say that of the dozen or more great performances of the G major sonata that I have on disc, this is at least as fine as any: it is worth getting Fray’s new CD for this alone.

But there is much more. Fray follows with a lovely performance of the haunting Hungarian Melody D817. And then for the last two major pieces on the CD he is joined by his one-time teacher Jacques Rouvier. First, they play the Fantasia in F minor D940. This, the incurable romantics among us will remember, was dedicated by Schubert to his young pupil the Countess Karoline Esterházy, often thought to have been the object of his hopeless love: and the piece certainly calls for yearning and passion. I have long loved the old recording from 1978 by Imogen Cooper and Anne Queffélec. But Fray and Rouvier are perhaps even better. Certainly, the yearning in the first dotted theme (with its Hungarian echoes) is as intense; the passion as the music then goes through its evolving moods — stormy, a burst of sunshine, clouds regathering interspersed with more moments of fleeting happiness — is as heartful; the moment when the first yearning theme returns is as affecting; the build-up through the fugato passage to the very final appearance of the initial theme as the music comes to its abrupt recognition that the yearning is indeed hopeless, all this is wonderfully well done.

The CD concludes with the ‘Lebensstürme’ Allegro D947. This is not, for whatever reason, my favourite Schubert piano music: but again surely it could not be played better than it is here.

A wonderful disc then, most warmly recommended.  (And there is, by the way, a video about this CD on David Fray’s website.)