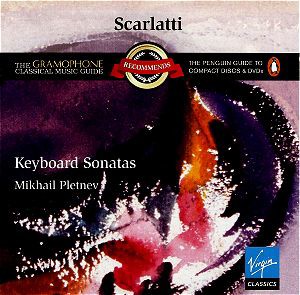 I have been listening and re-listening over the last week to Angela Hewitt’s new CD of sixteen Scarlatti sonatas. An experience I most certainly can recommend. She plays, as always, with such thought, precision, polish, articulation, sheer musicality. Some pieces Hewitt plays surprisingly slowly, including the final one, the very familiar Kk 380: but her typically fascinating musical notes in the CD booklet make her case for thinking, with Kirkpatrick, that Scarlatti’s tempo indications are more indications of rhythmic character than speed. Listening to Hewitt’s disc, though, took me back to listen yet again to Mikhail Pletnev’s 1995 double CD. When I first found this shortly after it was released it was completely revelatory (to someone who only knew some of these sonatas from harpsichord performances). Pletnev is even freer, even more pianistic, than Hewitt; I suppose interesting questions arise about performances as distant from historic, period, style as this. But the results are so beguiling — often poignant, strange, emotionally telling — that I have to keep returning to them.