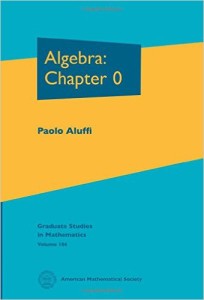 It depends what base you are starting from, of course. At a really introductory level (first year undergraduate, perhaps), one really nice option which I can warmly recommend is Alan Beardon’s relatively short Algebra and Geometry (CUP, 2005), which is very well put together and indeed not-too-abstract. But perhaps this doesn’t take you far enough to get a more rounded sense of modern algebra.

So suppose you want more than you’ll get from Beardon; or perhaps you already have some — possibly fragmentary, possibly half-remembered — knowledge of algebra, and want to go up a level in sophistication and detail. What then? One option is Saunders Mac Lane and Garrett Birkhoff’s Algebra (3rd edition, AMS Chelsea, 1999). This is a distant and slightly more advanced descendant of their famous A Survey of Modern Algebra (which originally dates back to 1941), and is notable for the way it weaves into the story categorial ideas, with a fairly light hand and in an illuminating way. But the treatment is quite brisk, and I think there is now a better option, taking quite a similar approach, but in a rather more engaging way. This is Paolo Aluffi’s Algebra: Chapter 0 (American Mathematical Society, 2009). Its presentation of even quite complex ideas is typically exemplary, both in giving motivation, and in explaining official definitions, presenting the proofs etc, and all often written with a light touch. So this is admirable. and I think is particularly suitable for self-study.

The chapter titles indicate the coverage. I, Preliminaries: sets and categories (so yes there is early introduction to categorial ideas, but again done with a light touch, emphasising the notion of ‘universal properties’). II, Groups, first encounter (the basics done very clearly). III, Rings and Modules (getting as far as a first look at complexes and homology and exact sequences). IV, Groups, second encounter. V, Irreducibility and factorization in integral domains. VI, Linear algebra. VII, Fields. VIII, Linear algebra, reprise. IX, Homological algebra. So things eventually get pretty serious, and you can bail out well before the end but still with a good sense of the topics and approach of modern algebra.

These days, alternative standard recommendations for tackling algebra at this sort of level include e.g. Serge Lang’s Algebra (3rd revised edition, Springer, 2002), and David Dummit and Richard Foote’s Abstract Algebra (3rd edition, Wiley, 2004). But these are quite a bit longer than even Aluffi’s weighty volume, and really cover unnecessarily much (for our purposes). And, more to the current point, I would say neither is a particularly attractive read.

So headline summary: if you want to learn some algebra, dive into Aluffi’s Algebra: Chapter 0.