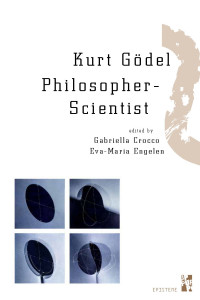 The essays, at a very quick first glance, look a rather mixed bag. But the unifying thread is that they are in one way or another prompted by engagement with (some of) Gödel’s still-unpublished Maximen Philosophie,  the fifteen surviving philosophical notebooks, written in the defunct Gabelsberger shorthand, that date from 1934 through to 1955, though most actively written from 1940 to 1946 or so. I plan to dip into this book over the coming weeks when the mood takes me, and I’ll let you know what I think.

The first paper is by John Dawson, writing with his customary lucidity under the title  “What have we learned from the Gödel Nachlass, and what more may it have to offer?” His answer comes in three parts. (1) There is probably nothing more to be discovered about the details of Gödel’s life — the Nachlass has already been heavily mined for biographical purposes (not least, of course, by John Dawson himself). (2) As for Gödel’s logical/mathematical work,  again the worked-up papers from the Nachlass have since appeared, as has a significant amount of relevant correspondence. Important work has been done by various authors on the development of Gödel’s ideas using these now-published resources. What has yet to be fully exploited, Dawson suggests, are Gödel’s mathematical workbooks, his Arbeitshefte. Warren Goldfarb has written on Gödel’s notes on Herbrand, and Jan von Plato has worked on Gödel’s reactions to Gentzen’s consistency proofs. But much remains to be examined.

And then (3) what about understanding Gödel’s philosophical views? Again, our  understanding has much increased with the publication of the material from the Nachlass in Vol. III of the Collected Papers, and Dawson reviews some of the themes. Then he adds

What then is to be expected in the future? The recent transcription of volumes IX-XII of Gödel’s Max/Phil notebooks undertaken by Professor Crocco’s group … is a most exciting development that will surely lead to increased interest in and discussion of Gödel’s philosophical views — including, unexpectedly, notes found therein concerning his thoughts on quantum mechanics.

That’s why this present volume promises to be interesting, as I said: the new transcriptions of those parts of the philosophical notebooks have been accessible to this group of authors. So what have they found?