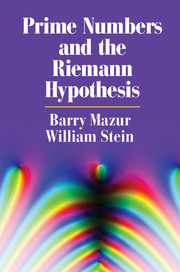 Here’s a newly published book from CUP by Barry Mazur and William Stein. It’s delightfully short — just 128 pages before the endnotes, and in fact a fair proportion of those relatively few pages is taken up with graphs and diagrams, and photographs, and there is a lot of white space. The aim is to explain the nature of the Riemann hypothesis and how issues about the distribution of primes relate can be illuminated e.g. by devices from Fourier analysis: there is real mathematics going on here, not just popularising gossip or arm-waving history. The intended readership, at least for the first parts of the book, is beginning mathematics students (or curious amateurs who do have a little maths).

How well does the book succeed? The headline news: this may at the beginning be a bit too noddy and towards the end be a somewhat bumpier ride than the authors intend — but I indeed found the book very engaging and illuminating. I’d recommend it warmly. (OK, I know I’m not quite the audience the authors had in mind, but this isn’t maths I’m at all familiar with, so in this area I do count as a pretty naive reader.)

Before giving just a bit more detail, however, I’ll get out of the way a double presentational reservation, namely about the use of photographs (which might put off some potential readers). In Chapter 1, for example, we are given a story from Don Quixote that turns on the primeness of 17: cue illustration from a translation of that book. And we are also told the primeness of 17 has something to do with the fact that there are periodic cicadas which emerge every 17 years: cue snap  of a cicada. Later when talking about (mathematical) spectra, we get a dull stock photo of a rainbow, and — heavens above! — when talking about the kind of smoothing of data that produces read-outs of average vehicle speed we get a  big photo of a car dashboard. Oh dear. These silly illustrations are quite pointless and in fact spoil the aesthetics of an otherwise rather  attractively produced book and send quite the wrong message  (let the book be judged by the zestfulness and clarity of its mathematical expositions, not by false gestures to user-friendliness of this kind). But there’s another reservation, about the other pictures which are portraits. Unlike the popularising books of a familiar kind, we don’t get stories about the lives and eccentricities of past mathematicians: there’s almost no biography here. Yet we do still get unnecessary mug-shots of various mathematicians from Descartes to our contemporaries. Which emphasises all too vividly that those mentioned are — unsurprisingly, given the history — one and all male. Without wanting to come over all politically correct, I wonder whether — in a book trying to enthuse the young —  it is a bright idea in this way to unintentionally reinforce once again the impression that maths is a man’s game?

For any real number X, the number of prime numbers less than X is approximately Li(X) and this approximation is essentially square root accurate.

Informally, Li(X) is defined as the area of the region under the graph of 1/log(X) from 2 to X, and square root accuracy can be thought of as getting right at least the first half of the digits of  the number of prime numbers less than X. Thus explained, this version of the Riemann Hypothesis will therefore be available to any high school student who has met natural logarithms. Lots of computer-generated diagrams are used to make this Hypothesis look a decent bet (though the authors also give warnings about reading too much into such diagrams). And then, if you’ve met the cosine function, you’ll understand the rest of Part One too, with its hints of Fourier analysis. This is all, surely, very well done  though a little slow to start.

In Part II, we meet “generalized functions” like the Dirac delta function and members of the same family, and get to think rather informally about Fourier transformations of delta functions and the like. So we arrive at the idea of a trigonometric series having an infinite “spike” at various values, and develop the idea of a spectrum of spike values, and learn how to get powers of primes into the story. This requires a bit more more background, and a bit more sophistication, but is still very accessible. Computer-generated diagrams of the behaviour of various truncated  trigonometric series are again very effectively deployed in order to underpin plausible hypotheses about what happens in the limit.

Part III is called “The Riemann Spectrum of the Prime Numbers”. I’m not quite sure why the rather short Parts II and III are separated, as it doesn’t seem to require more mathematical sophistication to follow the further exposition here — just a bit more effort, perhaps. With few lapses, this is also clearly and engagingly done. But note, we are still working with those ideas of trig series and Fourier transformations from real analysis, and haven’t yet met any complex analysis, and hence not yet met the Riemann zeta function. That happens in the very short …

Part IV, “Back to Riemann”, where we begin to connect up the approach of previous chapters with Riemann’s own work, relating the “Riemann spectrum” of spiking points of a certain series with the non-trivial zeros of the zeta function. And here the level does indeed ratchet up. It’s not just that you need to at least dimly recall some notions from complex analysis, but the speed of exposition goes up. In fact, I rather wish the space wasted on pointless pictures had been used instead to take things more gently/expansively here and to illuminate more the connection between various versions, announced equivalent, of the Riemann Hypothesis. We are also, along the way, told that RH has lots of interesting implications: again, it would have been good to learn more.

It would also have been good to finish up with a couple of pages or so of an annotated reading list for those enthused enough to want to follow up the discussions (with more pointers, at any rate, than we get in passing on pp. 119-120). After all, Prime Numbers and the Riemann Hypothesis  is certainly accessible and intriguing enough to leave many readers wanting to know more.

Overall, then, at least modified rapture! And forgetting the bum notes hit by the photos, we could do with more maths books in this general style.