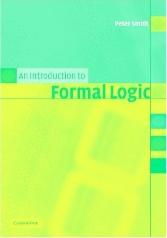 News: I didn’t hesitate long — I’ve decided to take up the suggestion that I write a second edition of my Introduction to Formal Logic. The headline plan that CUP and I are both pretty happy with is to include chapters on natural deduction but to keep length under control by shifting some of the current content that goes beyond a usual first logic course to supplementary chapters available on the book’s webpages. So hopefully there will be a significantly improved new version, perhaps re-branded into the Cambridge Introductions to Philosophy series, out by the end of next year. Promises, promises … (So, talking of promises, enthusiasts for category theory probably won’t get the updates/additions to my ongoing Gentle Introduction that I was planning for this summer: those who think that logicians shouldn’t be fossicking about with category theory will be pleased I’m doing something possibly useful instead.)

In time, I’ll no doubt be making chunks of IFL2 available for comment and correction, suggestions and advice, as I did for the second edition of the Gödel book. Watch this space.

I’m making a start by reworking the first part of the book, call it the pre-formal preamble. At the moment, there are six (short) chapters talking in introductory terms about the business of logic, deduction vs induction, the general notion of a deductively valid argument, the way that valid arguments come in families sharing the same inference pattern, the informal counterexample method (roughly, how to show an argument is invalid by coming up with another argument sharing the same inferential form with true premisses and a false conclusion), and  informal proofs (roughly, how to show an argument is valid by breaking a big leap from premisses to conclusion into smaller, more obviously valid, steps). When I was lecturing the course on which the book was based, I’d start off with a few sessions on these very general themes before turning to the formal stuff. And I continue to think this is how you need to start, with some scene-setting and motivation for the formal turn. Still, I’m finding my current opening chapters a bit embarrassing in places (it is only when you return to something after a few years that you realize what you, of course, meant to say!). So I’m rewriting busily and I hope the result will be quite a bit better; it is certainly ought to be a bit shorter and tauter.

Having more or less done a rough initial rewrite over the last week or so, I’m pausing to take a look to see how other authors of formal logic texts have solved the problem of how to handle the pre-formal preamble. Let’s start by looking along my shelves, blowing the dust off the top of some intro books,  and revisiting first a few old texts from up to about 1970. I’ve actually been surprised by what I’ve found (which in some cases didn’t chime at all with my vague supposed memories).

Some authors solve the problem of the pre-formal preamble by the simple expedient of ignoring it, and diving straight into formal work. Richmond Thomason  does this in his  Symbolic Logic: An Introduction (1970) — this largely forgotten(?) book has some nice features, clearly presenting a Fitch-style system, but Ch. 1 is cheerfully titled ‘Uninterpreted Syntax of a Logical System’, which is diving straight in with a vengeance! There’s is a bit more, but in fact not a lot, at the beginning of Fitch’s Symbolic Logic: An Introduction (1952): but some of what there is seems skew to what beginners might need — and though the book tells us at some length about the nature of propositions,  we don’t get much about the point of deductive  logic before getting down to business.

Suppes’s Introduction to Logic (1957) goes straight into a very lucid introduction to sentential logic. There is very little preamble either in Lemmon’s once heavily used Beginning Logic (1965), which is already beginning to introduce a formal language by p. 7: and although the notion of validity is introduced at the bottom of Lemmon’s p.1, we don’t really get any of the usual informal explications. Jeffrey’s zestful Formal Logic: Its Scope and Limits (1967) is even faster off the mark than Lemmon. We do get an informal characterization of validity on his p.1, but then we are straight off to work with truth-functional logic.

My memory played me false with respect to Quine’s Methods of Logic (1952, 1966, 1974). Yes, there is an elegantly written introductory chapter, before we start working on propositional logic. But no, this is more an overview of aspects of Quine’s philosophy — his picture of e.g. the way ‘[o]ur statements about external reality face the tribunal of experience not individually but as a corporate body’ — than it is an informal account of notions of deductive validity etc.

So the first book from that era which I’ve picked out which does provide the kind of pre-formal preamble which (to my mind) it is so natural to want is Benson Mates’s Elementary Logic (1965, 1972). Here there is indeed a 19 page ‘Introduction’, with the first section invitingly titled ‘What logic is about’, followed by sections on ‘Soundness [i.e. validity] and truth’, ‘Soundness and necessary truth’, ‘Logical form’, and ‘Artificial languages’. (There is then a second chapter of ‘Further Preliminaries’). Mates’s first chapter here seems beautifully clear, and well geared to its audience, and very much in the spirit of my opening chapters. Or rather, I should say — since I must once upon a long time ago have read Mates carefully —  my opening chapters are in his spirit. So this goes on my list for a careful reread, to see if I’ve missed a trick here or there.