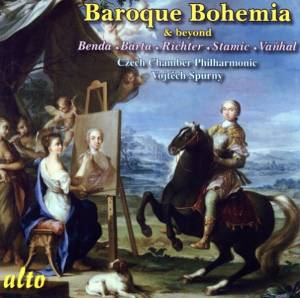 Another in my sporadic sequence of random CD recommendations. And this is, in fact a recommendation for a sequence of eight disks, called Baroque Bohemia and Beyond (or in one case Bohemian Baroque), with the Czech Chamber Philharmonic, conducted by Vojtĕch Spurný or Petr Chromčák, on the Alto label.

As the titles suggest, these are performances of (pretty obscure) Bohemian baroque and early classical symphonies and concertos, mostly composed by rough contemporaries of Haydn. Some of the composers are indeed so obscure as not to have Wikipedia pages even in Czech! And yes, the music is charming, diverting, sometimes surprising, and often delightful — but perhaps mostly not exactly great (it makes you aware once more just how consistently wonderful Haydn is!). Still, these disks have been — I’ve found — a lovely source of cheer over the last few weeks. Good to listen to while doing some of the typographical chores of converting my logic book into LaTeX for example. And an occasional very welcome and positive distraction from the post-Brexit blues (and the general sense that, politically, the world is going to hell in a handcart).

The eight discs are all freely available on Apple Music (and so, I guess, on other streaming sites?), though they also pretty cheap to buy.