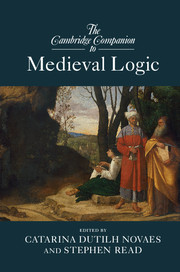 There is a new Cambridge Companion to Medieval Logic just out, edited by Catarina Dutilh Novaes and Stephen Read (all praise, by the way, to CUP for continuing to price the paperbacks of books like this so very reasonably).

The Companion is divided into two parts. The first, ‘Periods and Traditions’, has seven historical essays with titles like ‘Arabic Logic up to Avicenna’ and ‘Logic in the Latin Thirteenth Century’. The second part, ‘Themes’, has eight essays on topics like ‘Propositions: their Meaning and Truth’, ‘Sophisms and Insolubles’ and  ‘Consequence’.

Having dipped in and out, skimmed here and there, I’m not sure this is quite the book for me: but your mileage, as they say, may very well vary. As with much writing on the history of philosophy/history of logic, it will depend whether or not your interest is indeed primarily  historical. A lot of obscure-to-me figures get name-checked, without inspiring much inclination to find out more. If your attitude like mine is rather ahistorical,  if you are hoping to look to the medievals for some good logical ideas either missed or not well developed in current debates, then this is probably not quite the book for you. Certainly, given my ahistorical interests (OK, I’m a philistine), I would have welcomed a book which said quite a bit more about quite a  bit less.

For example, we are told on p. 317 that the view that from an impossible proposition anything follows “eventually … prevailed”. But we don’t get to know why, or what the contending considerations were. In the same chapter on consequence we are told that Buridan “subsumes under a broader notion of consequence” both, as we would put it,  $latex A \to B$ and $latex A \therefore B$. Since we tell our students that assimilating these two is a Bad Mistake, I wanted to know more about how this subsumption plays out, and whether it leads to trouble; or does it e.g. intimate an inference-ticket theory of the conditional? But my questions went unanswered.

Or take the chapter on propositions. We are told that for medieval logicians a proposition is a “type of sentence. i.e. a linguistic expression … singled out by its truth-evaluable character”. But then, to ask the level 101 questions, how did these medievals respond to the arguments (which would be familiar? or wouldn’t they be?) for thinking of the primary bearers of truth and falsity as being not types of sentences but rather the contents of the judgements the sentences can be used to express? Did these logicians, or some of them, end up with propositions-qua-sentences and propositions-qua-Gedanke? If not, why not? If they did, what’s the story to be told? Now, I think I take away from the chapter that there were different accounts on the market — but I really am left very unclear about what they were, how the arguments went.

One more example. There is a chapter on Sophisms and Insolubles. This ranges widely. But the result is that we get just four pages on Liar-like paradoxes. Medieval discussions of those would be well worth a chapter themselves. So as I put it before, I would have very much like to have heard more about less.

Which of course is probably just to complain, quite unfairly, that the book is not the one I really wanted, to distract and inspire as I tangle again e.g. with the issues about propositions and consequence that are bugging me as I re-rewrite the very earliest chapters of my logic text!