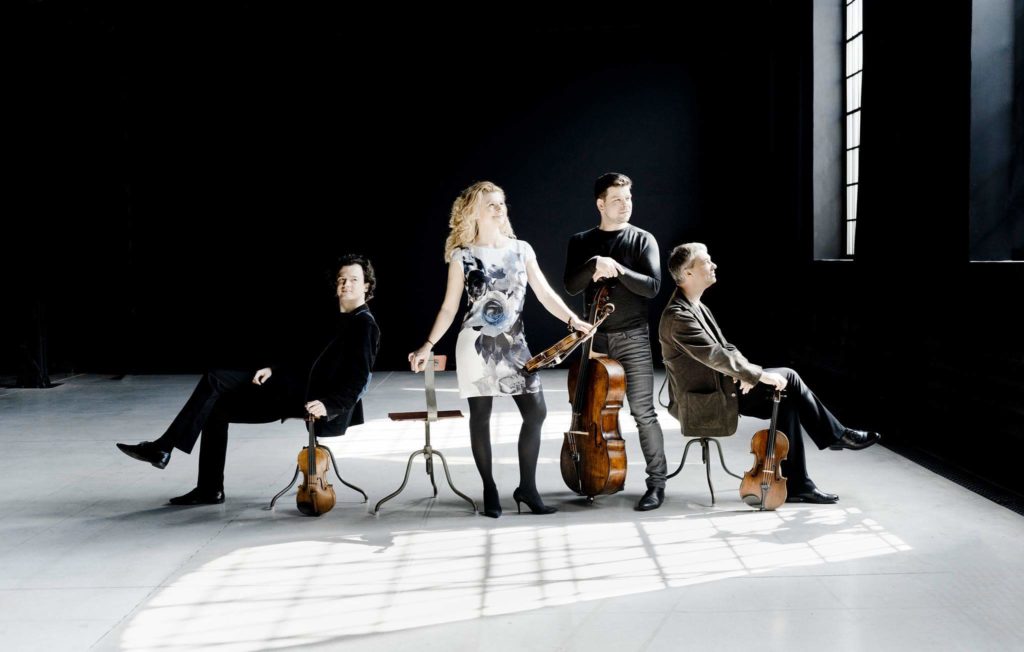 Another extraordinary concert from the Pavel Haas Quartet last night.

They began with Webern’s Fünf Sätze of 1909 – extremely condensed, emotionally unsettling music, which for me works better in a live performance than it can ever do listening to a recording. Certainly I have never got anywhere as much out of this Webern, as from this characteristically intense but totally controlled performance from the PHQ.

Next, the Shostakovich String Quartet, No. 2. Again, this is unsettling music, emotionally torn and veering from dissonance (even violence — and a resulting broken cello string) to the simply melodic and back.  Compared with the couple of recordings I know best, this again was extraordinarily intense playing last night.

Reviewing a recent DVD of Schubert quartets by Cuarteto Casals, Michael Tanner remarks in passing, “One always speculates – at least I do – about the dynamics, artistic and personal, of string quartet performers”. I find I speculate too. Was it just my romantic imagination, or at the centre of the slow movement of the Shostakovich, when the first violin has a particularly yearning melody set against the background of chords from the others, didn’t Veronica Jarůšková play directly to her husband and the father of their small child, the cellist Peter Jarůšek? It was difficult not to feel that.

After the  interval, the PHQ were joined by the young Dutch cellist Harriet Krijgh for Schubert’s  String Quintet. I think this was the first time that they have performed the piece together in a concert: so the first thing to say is that the ensemble, the stylistic unity, between the five of them was somewhere between superb and miraculous. And as for the interpretation, it is as you would have expected from the PHQ’s award-winning CD (with Danjulo Ishizaka). There was again  an overarching sense of the piece as a whole (so not at all one of those performances where the last two movements come as a disappointing let-down after the extraordinary heights of the first two). There was a particularly driven and emotionally taut third movement, so good that it drew premature applause. But, as always in great performances, the slow movement was transcendental: when it finished, the audience sat in total silence, not a murmur, not a rustle, not a cough.

If I am ever again present at a performance of the Quintet as good, I will count myself blessed.