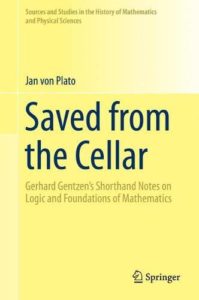 Springer have just published an exceptional volume that should quite certainly be in any university library that has any kind of logic collection. From the blurb of Saved from The Cellar – Gerhard Gentzen’s Shorthand Notes on Logic and Foundations of Mathematics: “Attempts at locating [Gentzen’s] lost manuscripts failed at the time [immediately after his death], but several decades later, two slim folders of shorthand notes were found. In this volume, Jan von Plato gives an overview of Gentzen’s life and scientific achievements, based on detailed archival and systematic studies, and essential for placing the translations of shorthand manuscripts that follow in the right setting. The materials in this book are singular in the way they show the birth and development of Gentzen’s central ideas and results, sometimes in a well-developed form, and other times as flashes into the anatomy of the workings of a unique mind.”

You can freely download part of Jan von Plato’s introduction here (pp. 65 onwards give outlines of what are in Gentzen’s notebooks). Also the “Look inside” facility on the Amazon page here enables you to look at some of the translated notebook pages. The editing and translating of these notes look to be a major achievement, which should be of great interest, and not just to pure historians of logic.