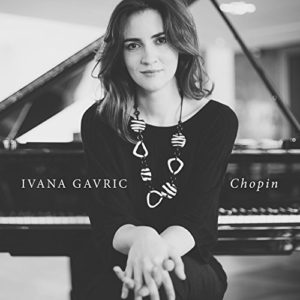 I’ve very much admired Ivana Gavrić previous rightly praised discs (I wrote about the first two here in an earlier post, and you can find more about  them here). So I was really  looking forward to hearing her play in the intimate surroundings of the Fitzwilliam Museum in Cambridge a few days ago; but she had to postpone the concert as she can’t fly at the moment on doctor’s orders.

So to make up for that, I bought a copy of her new Chopin CD, which I have been listening to repeatedly over the last few days.  Now, I should say that I’m not the greatest Chopin devotee, and indeed the only recording of his music that I have returned to at all frequently in recent years has been Maria João Pires’s utterly wonderful performances of the Nocturnes. So I’m hardly in a position to give a very nuanced response to this new disc. But I am loving it.

Ivana Gavrić plays groups of Chopin’s earlier Mazurkas, seperated by a couple of Preludes, a Nocturne and the Berceuse, which makes for something like a concert programme (you should listen up to the Berceuse — which is quite hauntingly played, her left hand rocking the cradle in a way that somehow catches at the heart — and then take an interval!). Some of the Mazurkas are very familiar, but many are (as good as) new to me. The Gramophone reviewer wanted Gavrić to perhaps play with more abandon — but no, her unshowy, undeclamatory, playing seems just entirely appropriate to the scale and atmosphere of the pieces,  often tinged with melacholy as they are.  She is across the room from a group of you, friends and family perhaps, rather than performing to a concert hall. And repeated listenings reveal the subtle gestures and changes in tone she uses to shape the dances; these are wonderfully thought-through performances. Listen to the opening Mazurka in C sharp minor, Op. 6 no.2 – the whole CD is in fact available on Apple Music – and you will be captivated.