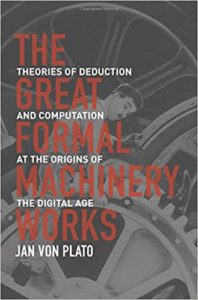 I’d like to have had the time now to carefully read Jan von Plato’s new book and comment on it here, as the bits I’ve dipped into are very interesting. But, after a holiday break, I must get my nose back down to the grindstone and press on with revising my own logic book.

So, for the moment, just a brief note to flag up the existence of this book, in case you haven’t seen it advertised. Von Plato’s aim is to trace something of the history of theories of deduction (and, to a lesser extent, of theories of computation). After  ‘The Ancient Tradition’ there follow chapters on ‘The Emergence of Foundational Studies’ (Grassman, Peano), ‘The Algebraic Tradition of Logic’, and on Frege and on Russell. There then follow chapters on ‘The Point of Constructivity’ (Finitism, Wittgenstein, intuitionism), ‘The Göttingers’ (around and about Hibert’s programme), Gödel, and finally two particularly interesting chapters on Gentzen (on his logical calculi and on the significance of his consistency proof).

This isn’t a methodical tramp through the history: it is partial and opinionated, highlighting various themes that have caught von Plato’s interest. And it’s all the better for that. The book retains the flavour of a thought-provoking and engaging lecture course, which makes for readability. It has been elegantly and relatively inexpensively produced by Princeton UP: you’ll certainly want to make sure your university library has a copy.