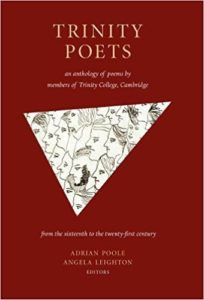 The answer to the quiz question? The first group, from George Herbert on, unlike members of the second group, might keep company together in an anthology of poets who were all members of Trinity, Cambridge. OK, if you are fussy, it might be stretching a point, I suppose, to count the versifying A.A. Milne as a poet: but let’s be ecumenical, as his verse certainly has added to the gaiety of nations!

And, yes, a substantial anthology of Trinity Poets has recently been published by Carcanet, edited by Adrian Poole and Angela Leighton. It features almost fifty poets from the sixteenth to the twenty-first centuries, many familiar, but also quite a few new to me. Like many a poetry anthology, it affords the delight of serendipitous discovery. Not least among the most recent poets. So while this is a book I bought with a certain self-mocking collegial devotion, I found myself dipping into it with considerable unforced pleasure.