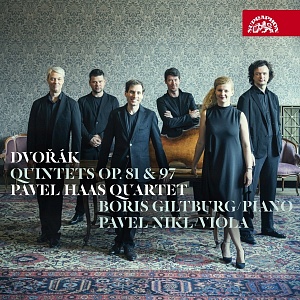 Why the three year gap? In part, because the Quartet changed second violins, being joined by Marek Zwiebel who strikes me as a remarkable occupant of the role — his interaction with Veronika Jarůšková’s first violin seems both technically and musically superb.

The Quartet’s next disc was the 2015 recording of the two Smetana quartets. Again a triumph, again a Gramophone Award for Chamber music disc of the year, and other awards too. But we have had to wait two and a half years for the follow-up. Why another long gap? Sadly, their founder violist, Pavel Nikl felt he had to leave the Quartet in 2016 for reasons of family illness. His replacement is another fine viola player in the same Czech tradition, another pupil of the great Milan Škampa’s, Radim Sedmidubský (for a long time the violist in the Škampa Quartet). We were at a concert shortly after Radim Sedmidubský had joined, and he then seemed understandably a little reticent, not quite at home. But a year later, at another concert, he was just terrific and fully part of the Quartet, and the Pavel Haas were back to, if not surpassing, their very best.

So here is the first recording by the new line up, a generous CD of two Dvořák Quintets, the second Piano Quintet Op. 81, with their friend Boris Giltberg on piano, and the String Quintet Op. 97, with their more-than-friend Pavel Nikl as the second viola. And the warmth and understanding between friends comes through, time and again. “Another Pavel Haas Quartet disc, another triumph,” says the Gramophone magazine. “The playing is breathtakingly good, each performer maintaining their own personality and yet working together to conjure a special magic,” says the Guardian. “Something that always takes my breath away with this quartet is the range and breadth of dynamics and tone colours that they produce, as well as the perfect blend of sound that they make whilst still allowing individual members’ contributions to come to the fore when required. The very opening of the piano quintet is a case in point: with its gentle cello melody supported solely by a rocking piano accompaniment it makes for a beautifully hushed opening, and as played here by cellist Peter Jarůšek it is simply sublime. Take also the first movement of the string quintet, where the players move from digging in with such force that it sounds like their strings are about to snap, to the most delicately tender chords.” — so writes the reviewer on the Presto site. I agree with every word.

The Dvořák pieces are wonderful, and give great joy: the playing couldn’t be bettered. This is indeed the disc you want in your Christmas stocking.