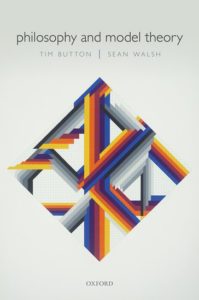 It is always pleasing to be able to warmly recommend a new book. So let me enthusiastically draw your attention to this newly published book by Tim Button and Sean Walsh, Philosophy and Model Theory, just published by OUP. (The pbk is £30 — but this is xvi + 517 larger-format and action-packed pages, so we certainly can’t complain!)

This is a unique book, both explaining technical results in model theory (eventually at a pretty non-trivial level), and exploring the appeals to model theory in various branches of philosophy, particularly philosophy of mathematics, but in metaphysics more generally (recall ‘Putnam’s model-theoretic argument’), the philosophy of science, philosophical logic and more. So that’s a very scattered literature that is being expounded, brought together, examined, inter-related, criticised and discussed. Button and  Walsh don’t pretend to be giving the last word on the many and varied topics they discuss; but they are offering us a very generous helping of first words and second thoughts. It’s a large book because it is to a significant extent self-contained: model-theoretic notions get defined as needed, and many of the most philosophically significant results are proved.

The book only arrived yesterday, so at this point I have to report just having read the opening four chapters (two carefully, two more quickly) and dipped very speedily in and out later in the book. But it seems to me that — in fact, as you’d expect from these authors — the expositions of the techie stuff is quite exemplary (they have a good policy of shuffling some extended proofs into chapter appendices), and the philosophical discussion is done with vigour and a rather engaging style. The breadth and depth of knowledge brought to the enterprise seems to be remarkable.

So first impressions: this book looks as if it is an outstanding achievement. Logic-minded philosophers should find it fascinating; and — with judicious skimming/skimming (the signposting in the book is excellent) — so should mathematicians with an interest in some foundational questions. Make sure it is in your university library (and at that price, in your library!).