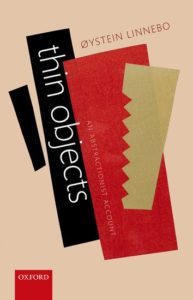 Øystein Linnebo’s book Thin Objects: An Abstractionist Account is out from OUP. If you’ve been following his contributions to debates on neo-Fregean philosophy of mathematics and related issues over some fifteen years, you won’t be surprised by the general line; but you will be pleased to have the strands of thought brought together in a shortish and (at least relative to the topic) accessible book. If you are new to Linnebo’s brand of neo-neo-neo-Fregeanism, this is your chance to catch up!

I confess that, having read Frege at an impressionable age, I still rather want something broadly Fregean to be right. I want there to be mathematical objects OK, but for them to be “thin”, to use Linnebo’s word — which he cashes out (perhaps not entirely happily, I’d say) as “not making a substantial demand on the world”. Linnebo gets his thin objects, Frege-style — his Platonism on the cheap — by conjuring the objects into being by abstraction principles. But unlike Frege and the Hale/Wright neo-Fregeans, Linnebo insists that the defensible and harmless principles need to be predicative. And it is well known that predicative abstraction principles by themselves are too weak to be useful for the foundations of much mathematics. Linnebo’s distinctive response is to allow indefinite iteration of abstraction principles (what he calls “dynamic” abstraction). But allowing completed infinite iterations would seem to entangle us in some pretty robust commitments again; so Linnebo wants to regiment his ideas about dynamic abstraction by going modal.

Does this work? Is getting thinness at the cost of going modal a good trade? I’ll let you know (given world enough and time).