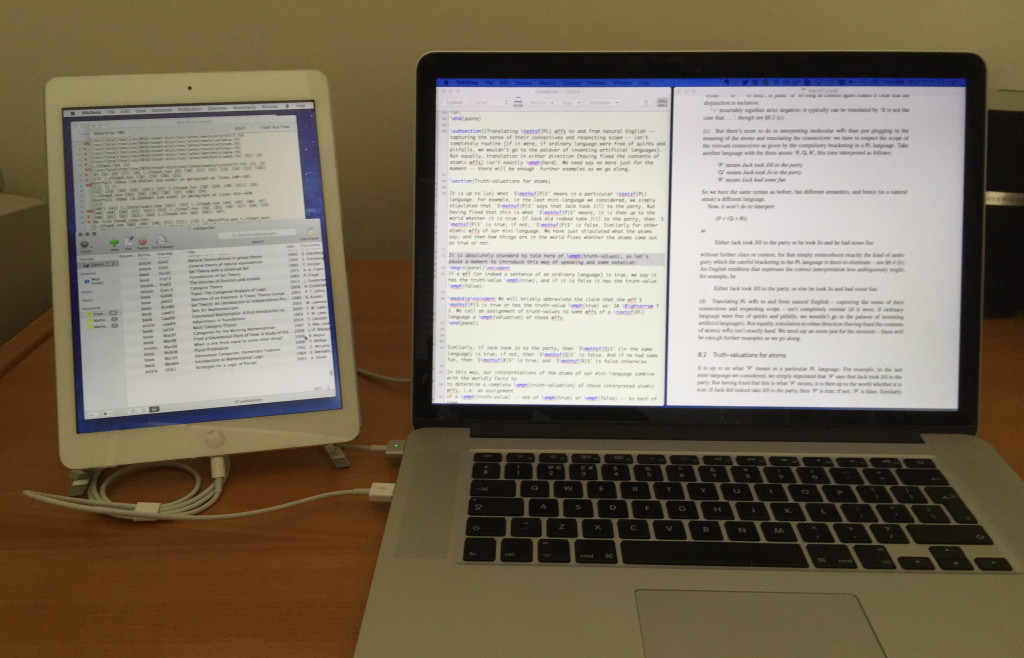 I’m relatively minimalist about techie stuff these days, and am mostly a late-adopter or never-adopter. But let me share a warm recommendation for something I have recently (re)-adopted, which actually does make work-life better. Yes, really! It will be no news at all to the more computer savvy: but this post is for the rest of us.

In fact, I first posted about using an iPad as an external monitor three years ago. However, I rather fell out of love with Duet Display when various changes with the Apple OS caused issues and when I also had a long undiagnosed cable/connection issue (I thought I had trouble with my MacBook ports, but as it happened it was two dodgy cables). But the developers have sorted the Mojave issues, I have sorted my cable issues, and Duet Display and my laptop are best friends again. So, by way of a public service announcement, let me spread the very good news once more (below the line, if you want to read on).

OK, the headlines are these, if you’ve not heard of Duet Display. If you have e.g. a MacBook of some description (or indeed a Windows machine), and an iPad of some kind, then Duet Display enables you to use the iPad as an additional display. It works over a USB cable (not wifi) and is nowadays extremely smooth indeed in operation: like the best Mac/iPad software, it just works, and seems generally regarded as best-in-class.

Once you’ve told Duet Display how you want to place your iPad and laptop relative to each other, you in effect acquire a small external monitor. The cursor travels seamlessly from screen to screen (and the current menubar moves with it), you can drag windows across, etc. It really does work a treat and is all now highly stable. And by the way, you can hit the home button on the iPad to navigate to other open apps in the usual way, and then return to Duet Display to pick up where you left off: very clever and very neat.

OK, this won’t magically increase your “productivity” but it assuredly reduces some of the irritations of window-juggling when working on a laptop screen, without having a big external monitor cluttering your desk.

For example, as pictured above, I can have the current source code for some LaTeX chapters in a tabbed TeXShop window on the left of the 15″ MBP screen, the PDF of the book on the right of the split screen — and then, off-loaded to a standard-sized iPad, there are the TexShop console and a BibDesk window. This is terrific as a TeXShop workspace. (Of course you could put something more distracting on the secondary screen!)

So, if you don’t know it, a very warmly recommended bargain on the iPad App Store.