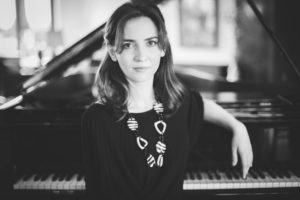 Out on a bitter evening to Kettle’s Yard for a concert by the pianist — and one-time Cambridge student — Ivana Gavrić.

I’m not sure why, but I haven’t been to a concert there for a number of years. It is a delightfully intimate space; however, the acoustic is a bit challenging for piano music. Hard walls and a tiled floor make for harshness (would it help to have a carpet under the paino? or to keep the lid near closed?). This I think particularly affected the opening Haydn sonata (no. 38, H XVI:23) — partly because one’s ears hadn’t adjusted yet, and partly because Gavrić was already aiming, I think, for a bright transparency of tone suited to early Haydn. But in that unforgiving context, she could perhaps have softened and relaxed the rather lovely Adagio.

But her following Schubert D784 was terrific. I’ve recently heard Mitsuko Uchida in concert playing this in a way that struck me as having become far too  mannered and excessive in dramatic emphasis. Gavrić by contrast had the drama under such thought-through control, with some wonderful phrase-shaping, particularly in the weighty first movement.

After the interval, Gavrić played Janácek’s four pieces In the Mists. I first got to really know these, indeed, from her much admired CD. Heard live, I found the pieces in places rawer, more challenging, than I’d remembered, making me very much want to return and listen again to her recording with new ears.

Next, Four Lyric Pieces, short homages to Haydn, Schubert, Janácek and Grieg by Gavrić’s Cambridge contemporary Cheryl-Frances Hoad. I’m not sure I ‘got’ the Schubert in particular,  but these were pleasing enough pieces with a slight jazz inflection, and we could  draw breath after the intensity of the Janácek.

In one of her engaging short introductions, talking to the audience, Gavrić said that her final piece, Grieg’s Ballade, had rather fallen out of favour on the concert platform. And arguably it does rather seem to run out of interesting ideas before the end. But I did very much warm to  Gavrić’s performance of it (as it seems did the rest of her audience).

For me, though, the high point of the evening has to be the Schubert — but then that’s Schubert for you! And I do hope that one day Ivana Gavrić returns to record more of his music. Meanwhile, her D784 (again) on her first CD is very fine.