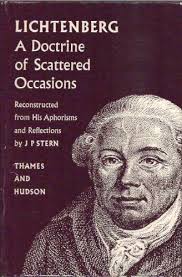 It’s a thing on Twitter at the moment — people posting the covers of seven books that have meant something to them, without comment, and nominating others to join in and post their choices in turn. Actually, I’d prefer to see at least brief comments and explanations, for these can be half the interest and enjoyment; but it got me thinking about what books I’d choose (putting aside the likes of, say,  Anna Karenina and other books which have perhaps meant the most, but hardly need words of approbation from me!).

Here then is one I’d perhaps choose for my seven — appropriate at any rate to this day, for it happens to be the 220th anniversary of Lichtenberg’s death. I must have bought J. P. Stern’s Lichtenberg: A Doctrine of Scattered Occasions as a student — it was remaindered in Galloway and Porter of fond memory. I was told about the book, I think, by another student who had gone to talk to Stern about Wittgenstein. I’m not sure why I found Lichtenberg’s aphoristic take on the world, his disorderly mind, so appealing: a counter, perhaps, to my mathematician’s over-orderliness. And he can suggest so much in a striking hint  —  ‘He was astonished that cats have two holes cut in their fur at precisely the spot their eyes are’. Over the years, I have kept returning to his humane reflections, to his jottings on the complexity of our human world and of the natural world. I find something immensely likeable  about the man who reveals himself here.

There’s a much more recent and wider selection from his ‘Wastebooks’ to be found in  Georg Christoph Lichtenberg: Philosophical Writings (trans. Steven Tester, SUNY, 2012). But it is to Stern’s insightful book which I still return with pleasure.