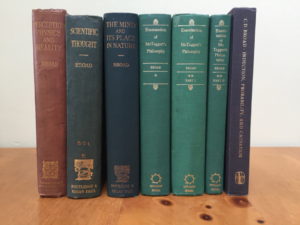 Of the great Cambridge philosophers in the first half of the last century, C.D. Broad surely remains the most underrated. Partly, I’m sure, that’s to do with his terrific clarity and his good sense (leaving aside that odd interest in psychical research inherited from Sidgwick). There are no theses to be written untangling his obscurities or trying to make sense of apparently dotty views. Read, for example, that remarkable passage from An Examination of McTaggart’s Philosophy that was reprinted in the old Feigl and Sellars reader as ‘The “nature” of a continuant’ which discusses dispositions, essences and natural kinds. This still strikes us as first-rate philosophy. And — read by so many graduate students in the 1950s and 60s — surely sowed some important seeds in the later revival of metaphysics.

I wrote a shortish encyclopedia article once on Broad as an act of Cambridge piety, and was asked if I’d be interested in writing a much longer piece for the Stanford Encyclopedia. But the occasion wasn’t right, and the time has now passed for me pick up that interest again. I’ve too many other things I’d still like to tackle.

So it has come to this. Faced with the perennial problem of where to shelve books as they mysteriously keep accumulating around the house (I am not the only guilty party here) it is time to acknowledge with regret that Broad is another author I will never return to, and so I need to pass on the handful of his books that I have kept up to now. There they are, in decent condition. They might like to keep each other company for a while yet — so any suggestions for a good home?

1 thought on “Taking leave of Broad …”