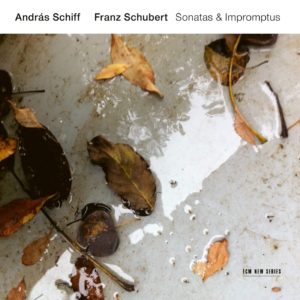 I can’t let one standout recent double CD release pass without the warmest recommendation. András Schiff has recorded more late Schubert — this time the Four Impromptus D899, the Drei Klavierstücke D946, and the Piano Sonatas D958 and D959. Schiff of course recorded all these about thirty years ago in much admired performances. But this time, as with another double CD a couple of years ago, he is playing on a Brodmann fortepiano of about 1820. And again the effect is quite magical.

Here is Andrew Clements writing in the Guardian about a live performance at Wigmore Hall on this instrument:

Such a piano may lack the tonal power of its modern counterpart, but as Schiff’s Schubert performances demonstrated so eloquently, the illumination it brings to works to which it’s exactly matched chronologically and geographically is extraordinary. The distinct characters of the top, middle and bass registers, together with the effects produced using the pedals (four on Schiff’s instrument) added extra layers of articulation and transparency to the music, while the intimate, contained soundworld complemented Schiff’s introspective view of these works perfectly.

In [an interview], Schiff defines Schubert by ‘his modesty, his humility, his lack of ego’; the same qualities are evident in every bar of these performances, which quietly command absolute attention rather than clamouring for it. These are profoundly affecting interpretations born out of a long-term loving relationship with both music and instrument, and ones to which I can see myself returning for years to come.

Me too! If you are sceptical — as indeed I confess I was before hearing Schiff’s previous fortepiano recording — then do try [from your favourite streaming service!] one of my favourite of Schubert’s shorter pieces, the second of the Drei Klavierstücke. I find Schiff’s touching performance of a piece I thought I knew so well to be wonderful beyond words, or at least, beyond any words I can muster.