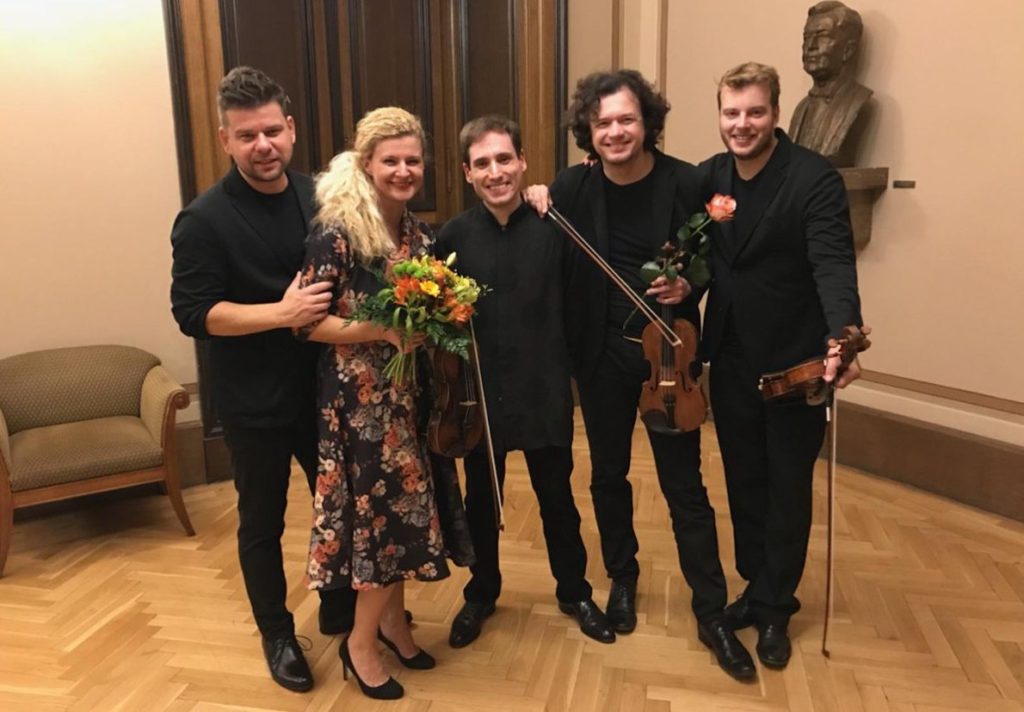 A few days after playing at Wigmore Hall, The Pavel Haas Quartet and Boris Giltburg were in Cambridge at the Peterhouse Theatre, again playing the Shostakovich Piano Quintet. This time, the other piece in the programme was Dvořák’s Op. 81 Piano Quintet.

One of PHQ’s remarkable gifts is to make performances of music that we know that they have rehearsed with great intensity sound freshly inspired, newly wrought. (The last quartet I heard in Cambridge was Quatuor Ebène, who are indeed fine — yet somehow they struck me as sounding too polished, and that surface gloss made it difficult to get an emotional grip on their performance.) PHQ recorded the Dvořák with Giltburg in 2017, and rightly won the highest praise for the disc and a Gramophone Award; but they played last night with such verve and warmth and evident love for the music, it was as if they had just recently discovered the piece. It is difficult to imagine, too, a more fitting match than between Giltburg’s mercurial playing and the Quartet’s — the happiest of musical partnerships.

I said after hearing their Shostakovich in London that I doubted that the Quintet could be played better. Yet, if anything, it was so last night. Perhaps it was the setting. Lovely though Wigmore Hall is, the small Peterhouse venue — seating just 180 people on two levels, so you can be no more than seven rows from the small stage — is a much more intimate space. And a group like the Pavel Haas, playing with characteristic passionate intensity, can then make a particularly intense impact. So in that venue, together with Boris Giltburg, their Shostakovich really took fire. Wonderful playing from all five of them.

(I was so caught up in the warmest applause at the end of the concert, I forgot to turn on my phone to picture them responding wreathed in smiles — so here they are, deservedly looking equally cheerful, after another concert!)