In the London Review of Books a couple of issues ago, there was a strangely timely review of a book on the plague in Florence in the early seventeenth century. The plague approached the city, only temporarily halted by the natural barrier of the Appenines

On the other side of the mountains, Florence braced itself. The officials of the Sanità, the city’s health board, wrote anxiously to their colleagues in Milan, Verona, Venice, in the hope that studying the patterns of contagion would help them protect their city. Reports came from Parma that its ‘inhabitants are reduced to such a state that they are jealous of those who are dead’. The Sanità learned that, in Bologna, officials had forbidden people to discuss the peste, as if they feared you could summon death with a word. Plague was thought to spread through corrupt air, on the breath of the sick or trapped in soft materials like cloth or wood, so in June 1630 the Sanità stopped the flow of commerce and implemented a cordon sanitaire across the mountain passes of the Apennines. But they soon discovered that the boundary was distressingly permeable. Peasants slipped past bored guards as they played cards. In the dog days of the summer, a chicken-seller fell ill and died in Trespiano, a village in the hills above Florence. The city teetered on the brink of calamity.

By August, Florentines were dying. The archbishop ordered the bells of all the churches in the city to be rung while men and women fell to their knees and prayed for divine intercession. In September, six hundred people were buried in pits outside the city walls. As panic mounted, rumours spread: about malicious ‘anointers’, swirling infection through holy water stoups, about a Sicilian doctor who poisoned his patients with rotten chickens. In October, the number of plague burials rose to more than a thousand. The Sanità opened lazaretti, quarantine centres for the sick and dying, commandeering dozens of monasteries and villas across the Florentine hills. In November, 2100 plague dead were buried. A general quarantine seemed the only answer. In January 1631, the Sanità ordered the majority of citizens to be locked in their homes for forty days under threat of fines and imprisonment.

And so it went (the review is really gripping). And so, with some rather marked similarities though a thankfully less vicious infection, it goes. The coronavirus lockdown has now reached Cambridge. Surely some days after it should have done, and surely it is still less stringent that it ought to be, given the experience of Italy now. The English, or rather too many of them it seems, are not conducting themselves well. Some national myths are being unmade as we watch. Grim times.

The now official lockdown will, I suppose, make relatively little difference to us, at least for the moment. We’ve been ultra-cautious about going out and about in our small corner of the town for the past two weeks. We rather suspect that we might well, like very many, already have had the virus in a pretty mild way. Who knows? We’ll have to wait until whenever an antibody test becomes available, though it would be good to know. When we feel a bit more lively, DV, time for some serious gardening (Mrs Logic Matters) and decorating. 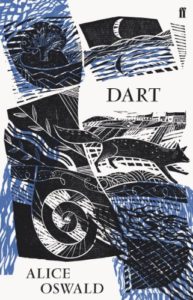 We were much looking forward to a Wigmore Hall concert a couple of days ago with the countertenor Iestyn Davies and the lutenist Thomas Dunford. But that of course was cancelled like all London concerts. To see what we missed, there are some really nice videos of Iestyn Davies singing on his site here. And looking ahead we’ve had to cancel our usual spring stay in Cornwall, which is a sad (apart from other reasons, they are now rightly strongly asking visitors to stay away). With that missed trip at the front of my mind, I picked up again, and read from end to end, a book (not Cornish but at least West Country in theme) that we bought on one trip in the delightful indie bookshop in Falmouth — namely Alice Oswald’s Dart, that follows the river and its people from source to sea. This is a wonderfully ambitious  many-layered, many-voiced, poetic journey full of allusion and mythic echoes and observation of nature and more: no wonder it won the T.S. Eliot Prize. This week’s warm recommendation!

Just when, after lean years, independent booksellers like the Falmouth shop I mentioned seem to have been having doing rather better, they will be hit hard by the lockdown. So do support your favourite ones by giving them orders. There’s a website here listing indie shops offering an online service: book love in the time of coronavirus.

2 thoughts on “From a small corner of Cambridge, 2”