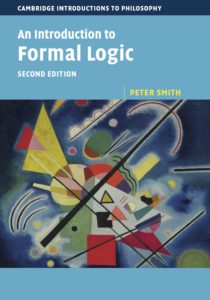 So here’s the cover for IFL2 (click for a larger version).  The painting, my choice, is Kandinsky’s Blue Painting (Blaues Bild) from January 1924. It has been slightly cropped by CUP’s designers but I do think it still makes for a good-looking cover. I’m really very pleased with the result.

I’m working away putting answers to end-of-chapter exercises online (currently I’m having fun with quantifier natural deduction).  This is actually rather a good task to have on the go right now. It is distracting enough to keep my mind off other things during a long afternoon stuck at home; but it hardly demands prolonged concentration trying to get my head round Difficult Stuff.  I’m making some very slight improvements to the exercises as I go along which can be incorporated into the final final book version when CUP call for it in a week or two. And so  on we go.

I’d like, though, to get back to thinking about category theory. Here’s one question: category theorists, or some influential ones among them at any rate, seemingly work with a non-standard conception of sets: but what is it, exactly (when you try to cash out the ‘bag of dots’ metaphor that gets trotted out)? As a warm up exercise (although I don’t think he tackles this question) I’m going to be sitting down to read carefully Luca Incurvati’s recent Conceptions of Set and the Foundations of Mathematics. If your library subscribes to the Cambridge Core system, you should be able to get it online. I’ll start posting about this book, chapter by chapter, in the next few days.