Some quite beautiful spring weather in recent days, and it’s rather frustrating to be confined to home. But while our whatever-it-has-been bug still hangs around, we should do what we can not to spread it. At least we are no longer feeling dog-tired much of the day, and want to get out. Tomorrow maybe. If we survive the excitement of a Waitrose delivery later.

Decorating plans are on hold. Guess who left it too late to order a delivery of what we needed. Which is a very small example of the irrationality that seems to hit people: at some level I knew perfectly well it was foolish to delay making the order when I first thought about it, and that  spending a day or two wavering over colour choices was likely to be silly. But it is difficult to really adjust your thinking to the strange times, isn’t it? — so waver we did, and now we’ll have to wait, until perhaps I find another source for at least some of the kit we need. Still, we seem to have plenty to keep us busy. Friends and family are keeping safe. The house is very comfortable even if the paintwork isn’t perfect, and the larder is well stocked. We are extremely lucky when so very many are not. The real world beyond this very small corner seems pretty grim in places. And April could be the cruellest month. 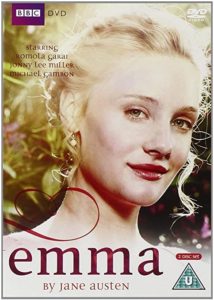 Distractions are needed. There’s a lot of High Culture being provided free online as various opera houses open up their back catalogue of recorded performances for streaming. For instance, we  caught the Swan Lake from Paris Opera which is available until April 5.  But mostly we are in the mood for unchallenging comfort viewing. So we watched the 2009 BBC adaption of Emma again. We enjoyed it enormously (thinking it even better on a second viewing). Of course you can cavil. You can argue that no filmed version can do even a quarter justice to Austen’s knowing narration as it slips in and out of her character’s minds. You can complain that, in this Emma, Hartfield is too grand, Mr Knightly a  bit too young, Mr Elton too caricatured. But as Austen adaptations go, this is surely as true to its original as any. And Romola Garai is terrific in capturing Emma’s vivacity and youth and fundamental good-heartedness (and shortcomings!). So that is this week’s recommendation for something to distract you!

The Amazonian ontological argument: if it is listed, it does/will exist.  So I better crack on with getting more answers to exercises online …

2 thoughts on “From a small corner of Cambridge, 3”