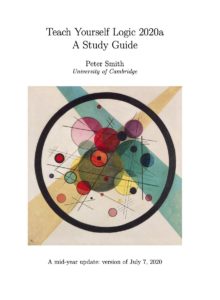 I have uploaded a half-year “maintenance upgrade” to the Teach Yourself Logic Guide. There are just a few additional entries, a few changes in existing entries, minor re-writing here and there, and then some re-arrangement of material to make it easier for the two different readerships — philosophers and mathematicians — to navigate the beginning of the Guide.

I really must give this project some more love and attention over the coming months (it’s been rather neglected as I have been concentrating on IFL2). In the first half of this year the Guide was downloaded over 15K times from this site, and looked at another 5K times on my academia page (I do still find those stats rather startling). So obviously — patchy and half-baked though it is in many places — there remains some real need for such a Guide. So I guess I should do my best to make it as good as I can. And it is fun enough to work on when in the right frame of mind.

Any suggestions for improvement are of course always welcome!  I surely must have missed some recent texts which might be worth looking at. Though I do suspect that the culture of “research assessments” over recent years — where writing such books (as opposed to papers read by eleven people) can count for so very little — puts many people off devoting their energies to writing introductory or mid-level texts.

5 thoughts on “Update to the TYL Guide”