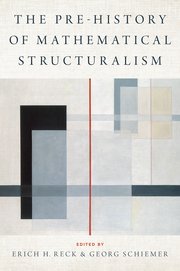 There is a new collection of essays edited by Erich H. Reck and Georg Schiemer being published by OUP, officially next month. Here’s the book description: “Since the 1960s, there has been a vigorous and ongoing debate about structuralism in English-speaking philosophy of mathematics. But structuralist ideas and methods go back further in time; that is, there is a rich prehistory to this debate, also in the German- and French-speaking literature. In the present collection of essays, this prehistory is explored in a twofold way: by reconsidering various mathematicians in the 19th and early 20th centuries (Grassmann, Dedekind, Pasch, Klein, Hilbert, Noether, Bourbaki, and Mac Lane) who contributed to structuralism in a methodological sense; and by re-examining a range of philosophical reflections on such contributions during the same period (also by Peirce, Poincaré, Russell, Cassirer, Bernays, Carnap, and Quine), which led to suggestions about logical, epistemological, and metaphysical aspects that remain relevant today. Overall, the collection makes evident that structuralism has deep roots in the history of modern mathematics, that mathematical and philosophical views about it have often been closely intertwined, and that the range of philosophical options available in this context is significantly richer than a mere focus on current debates may make one believe.”

I’m going to be really interested to read probably most of the essays in the book. So I plan to start blogging about them here. (I certainly don’t promise to have anything especially illuminating or insightful to say: but writing blog-posts makes me read a bit more carefully and helps me fix ideas.) And now the good news: you don’t have to fork out £64 in order to follow along! For this is being published as an open access title. The collection is already free to read at Oxford Scholarship Online and is offered as a free PDF download from OUP. Which is excellent!