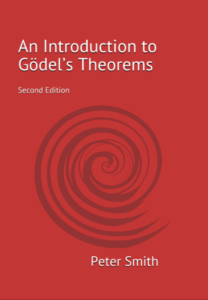 I made the second edition of An Introduction to Gödel’s Theorems freely available as a downloadable PDF a few days ago (here’s the link again), announcing it on this blog and also on Twitter. And then, because someone also posted the link on Hacker News, the news spread far and wide. The book has now been downloaded over 64 thousand times. Which is just a little bit mad. I’m sure most downloaders didn’t want a 388 page book. Still, as I said before, I guess that it is good to know that the very mention of Gödel’s Theorems  produced that much interest!

And now, as promised, there is also a cheap print-on-demand version available from Amazon. US link; UK link. (Find on your local Amazon by using the ASIN identifier B08GB4BDPG in their search field.)

This is a large format book, almost the same page size as the original CUP printing. OK, the bad news is that you don’t get a pretty cover (life is too short), and the binding isn’t quite up to the standards of a quality trade paperback. The printing quality, however, is at least as good as the original version. For anyone who (like me) usually prefers a physical book to reading onscreen, this reprint should be quite satisfactory. And the good news is that while the CUP version was £27.99, this one is just £7.99 in the UK (and comparable prices on other Amazons). So I guess no one can complain too much about that!

I do wonder though about the pricing policy of  publishers for student books that have been already published for a number of years (and which have already more than covered their initial fixed costs in publishing). CUP are better than very many: but what would really justify £27.99?