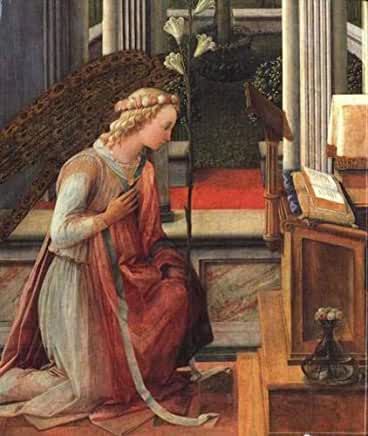 In another world, we would have gone to Florence again this year before spring, before the tourists really return. Out of season, the city becomes a delight,  the galleries and churches peaceful, the cafés and restaurants recovered by the locals. But it was not to be.

So, among other distractions, I’ve had to be reading art books instead. One that I have very much enjoyed is Megan Holmes’s Fra Filippo Lippi: The Carmelite Painter (Yale, 1999). (That detail is from the Annunciation that Lippi painted for Le Murate around 1443, and forms the cover.)

This is rather beautifully produced, as Yale’s large art books usually are. Indeed, I confess I initially bought it for the many illustrations. For Lippi is one of my favourite artists (if I could smuggle just one painting home from the National Gallery in London, it might well be the Annunciation there). So there was huge pleasure to be got just from a slow look at the reproduced paintings in Megan Holmes’s book. But then I found myself becoming thoroughly caught up in her project of trying to understand how Lippi’s work is bound up with his ambiguous relation to his friary. This is perhaps not the best written art monograph ever: it can be a little repetitive and sometimes overdoes the scholarly detail at the expense of the narrative flow.  But still,  I not only learnt a great deal about the particular artist recorded in the Carmine’s records as ‘Frate Filippo di Tommaso dipintore’, about his use of Carmelite imagery, and about the relation between his paintings and their particular varied religious settings. I also learnt — very late in the day for me! — some important lessons about how to look at early renaissance paintings more generally.  So, warmly recommended.

A footnote: You can still get Megan Holmes’s book second-hand, but significantly more expensively than when I bought my copy a couple of years ago. Moral: get art books when you are first tempted by them (whether exhibition catalogues or monographs like this one)! They far too readily go out of print and then aren’t reprinted. For example, about the time that I bought this book, I also bought Jean Cadogan’s Domenico Ghirlandaio: Artist and Artisan (Yale, 2001): that now costs at least four hundred pounds second-hand. So if there’s an art book you’ve been hankering after, don’t hesitate, snap it up now for a life-affirming lockdown treat!