Here’s a rewritten four-page chapter from IFL2 on empty domains. Difficult to know how to handle this topic. Many intro texts just skate over the issue. An earlier draft perhaps said a bit too much a bit too confusingly. Hope this strikes a better balance. Last-minute comments always welcome!

(By the way, “sets*” with a star is my usage in the book for when I really mean sets as objects in their own right — the ones that play a starring role in full-blown set* theory — as opposed to when I’m occasionally using lightweight talk of virtual classes which can be translated away.)

Well, I started watching the on-going series of lectures which I’d linked to a couple of blogposts ago. Frankly I can’t say the early lectures are at all good, and can’t now recommend you try them. They all seem, to put it kindly, very underprepared, underpowered, undercooked, low in nutritious content! Maybe later lectures are better.

I’d say more, but I’m saved the effort because there’s now a long comment to that earlier post sent by Peter F. which well expresses some of my concerns about the whole thing. 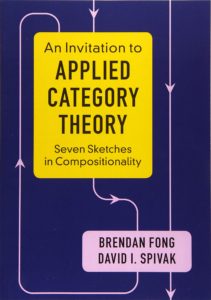 One of the books I’d set aside until the main work on IFL2 was done and dusted is Brendan Fong and David Spivak’s An Invitation to Applied Category Theory (CUP, 2019 — there’s a late version freely available here). I’ve now had a first proper look. I can’t say that the book overall works very well for me. When the authors are talking about things I already know a fair bit about, I find there are indeed interesting approaches and illuminating comparisons. But when they are introducing new-to-me material it, all goes by too fast to be very helpful. That could of course just be a comment on my inadequacies as a reader! — but I’d be quite surprised if mine weren’t a common reaction. Chapter 7 on sheaves and toposes, for example, is surely going to pretty impenetrable to someone who doesn’t already have some handle on this stuff.

However, there are obviously lively minds at work here, and so I’m encouraged to take a look at another of their projects — an MIT course of lectures with the estimable Bartosz Milewski (whose Category Theory for Programmers I think is terrific). The course, Programming for Categories, has a web page here with planned links to videos of each lecture and also links to lecture notes. The lectures are just starting, and new videos/notes should appear five times a week for four weeks. I’ll hope to learn a lot!

There is an entry I hadn’t noticed before (a recent one?) on the always interesting though sometimes annoying Five Books website, this one suggesting five books on logic.

The recommendations come from Tom Stoneham (a professor of philosophy at York). And they do seem to me to be a somewhat rum collection. I wouldn’t have dreamt in a month of Sundays of starting with Colin Allen and Michael Hand’s Logic Primer (this very brisk and to my mind dull effort may or may not work as a back-up to a suitably tailored lecture course, but as a teach-yourself book there are surely dozens better). Wilfrid Hodges’s Logic, Stoneham’s other mainstream textbook recommendation, is a vast improvement; but it has its quirks. While the idea that you’d recommend Wittgenstein’s Tractatus to someone wanting to find out about logic and why it matters strikes me as frankly perverse.

But it is very easy to carp! So what would I be recommending to the same intended readership?

Well, why not start off with Graham Priest’s typically zestful Logic: A Very Short Introduction (OUP), which should intrigue and tantalize.

And then I’ll suggest — well, forgive me, but of course I will! — the forthcoming second edition of my Introduction to Formal Logic (CUP) as a gentle introduction with a natural deduction flavour. Then I think  that people should read another textbook, with a different approach. (I agree with Stoneham here, that you want to see different approaches, different emphases, early on.) Hodges’s book is indeed a possibility here, or Richard Jeffrey’s wonderful Formal Logic: Its Scope and Limits (now Hackett). But I’d go for Nick Smith’s longer and more discursive Logic: The Laws of Truth (Princeton). My namesake’s book engagingly re-covers the same ground as mine and rather more as it highlights trees, with more side-discussions along the way (lots of interesting endnotes!).

I’ll follow Stoneham in rounding off the introductions to formal work with two more books that look sideways at related philosophical issues (rather than pushing on with more technical logic — the TYL Guide will give someone more than enough pointers on that!). But which two books? Stoneham recommends Quine’s short Philosophy of Logic as being “all about the philosophical arguments that underlie the decisions to do logic in one way or another”. But my book and Nick Smith’s already say quite a bit of that. So let’s set Quine aside, good though it is. As an alternative, how about Stephen Read’s still zippy, but more expansive and more adventurous, Thinking about Logic (OUP)?

Stoneham also recommends Mark Sainsbury’s Paradoxes, but this revisits topics already touched on in Graham Priest’s little book and in Read’s. So why not have some very instructive logical fun with Raymond Smullyan (to be read in parallel with the worthy books by the Smiths!)? How about starting with his old What is the Name of this Book? (now republished by Dover)?

So there you have Stoneham’s five (if you’ve clicked the link, you can also read his reasons, which I’d certainly want to challenge), and you have my five (as of this evening!). What would be your five, still bearing in mind the intended audience?