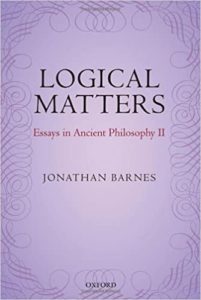 How did I miss that the second volume of Jonathan Barnes’s papers on ancient philosophy goes by the title Logical Matters? A must read, surely, for Logic Matters!

Better late than never, following a thread that started some days ago when reading Susanne Bobzien’s piece on Frege and the Stoics, I found myself led to a couple of long pieces by Barnes, not easy to get hold of. So now — really rather extravagantly, but lockdown rather reduces the opportunities for other extravagances — his 800 page book of collected essays has arrived on my desk. I’ve already read a couple of hundred pages with real pleasure and considerable enlightenment. It isn’t in fact taking me far from themes I’ve been worrying about, thinking again around and about my intro logic book with a distant third edition in mind.  After all, the ancients — Aristotle, the Stoics (such as we have them), the ancient commentators — were concerned with logical basics. They were wrestling with ideas of consequence, of form, of predication and so on; and thinking through their struggles can’t but help throw some sidelight on modern preoccupations when we (re)turn to basics. For example, I found Barnes’s hundred page paper on ‘Logical form and logical matter’, much of it keeping company with the ancient commentator Alexander of Aphrodisias, genuinely instructive.

Collections of papers like this don’t seem to get reviewed. Do they just fall as dead weights onto the shelves of libraries with generous funding? This one doesn’t even seem to have been made available by OUP in its online “Oxford Scholarship” service. That’s more than a pity. Barnes’s logical papers have been very scattered so need to be brought together like this to be more available; his voice is engaging, many of his topics of considerable interest, his discussions seem insightful (though I’m no classic!); the work collected here surely adds up in a very impressive way. And as I said, it is far from being just of interest to those working specifically on ancient philosophy. Do look it out (if you can persuade your local librarian …).

It is though rather depressing to reflect that this is only one of four similarly sized volumes of collected papers. To be added to an equally impressive sequence of earlier books …