I’ve been preoccupied for the last three or four weeks with a big domestic project which I’ve been putting off for years. But with help from two men with a van, and after multiple trips to the town dump, lots of shelf building, painting and the like, the job is done, and our rather large garage is looking positively civilized. At last. Rather satisfying. Tiring days, though, so not much energy left for logic.

Very enjoyable non-logical reads, however, have included Lorna Sage’s Bad Blood (which somehow I’d not read before), the ever-readable Jane Gardham’s Bilgewater, and Anne Tyler’s newly paperbacked and wonderfully humane Redhead by the Side of the Road.

Not so much enjoyable logic though. Various thoughts keeping nagging away at me about ways to improve my IFL; I think I’m just not going to be able to resist the urge to write a bigger and better third edition. So I’ve been dipping into various relevant books and articles. I’ve just reread the interesting but patchy long piece on the ‘History of Natural Deduction’ by Jeff Pelletier and Allen Hazen published in the final volume of The Handbook of the History of Logic, which has set me off worrying again about which particular choices in constructing an ND system are of some conceptual significance. Other contributions in that weighty volume (which is titled ‘Logic: A History  of its Central Concepts) look potentially interesting too. But the first piece on ‘History of the Consequence Relation’ by Conrad Rasmus and Greg Restall turned out to be sadly disappointing: it covers the terrain too superficially to be very illuminating. I’ll report back on some of the other contributions. I’ve also been revisiting Neil Tennant’s Core Logic; but although I’m certainly sympathetic to his project, I’m again finding Tennant’s mode of presentation unnecessarily off-putting (we need a short Core Core Logic). 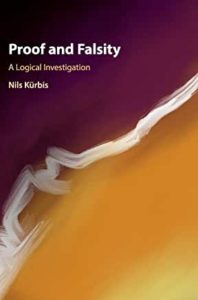 However, I am enjoying getting to grips belatedly with Nils Kürbis’s Proof and Falsity, which has now been out a couple of years. The topic is going to be negation and it’s role in deduction in general and natural deduction systems in particular, and you can’t get more basic than that! The opening two chapters — which take us some 90 pages into the book — set the scene, giving a sympathetic elaboration of the Dummett/Prawitz theme that it is the rules of inference which give the logic operators their meanings. As is familiar, the distinctively classical double negation rule and its equivalents seem to be anomalous, standing apart from the meaning-conferring balanced pairings of introduction/elimination rules which according to the Dummett/Prawitz theme fix meanings (Kürbis has helpful things to say in his Chapter 2 about what makes for such a stably balanced pairing). So I really want to see how the story now develops over the coming chapters — can you cleave to what is defensible about proof-theoretic semantics for the logical operators while giving a classical treatment of negation?

I’m not sure how the book will strike readers who are not already well-versed in the topic and who are not at least intrigued by Dummett’s wranglings with the issues; but the project appeals to me. I confess I’ve taken a peek at the final chapter, and I’m doubtful that I’ll want to end up where Kürbis does. However, the writing is engagingly clear and direct, and there have already been some telling arguments. So I’m much enjoying the journey so far.